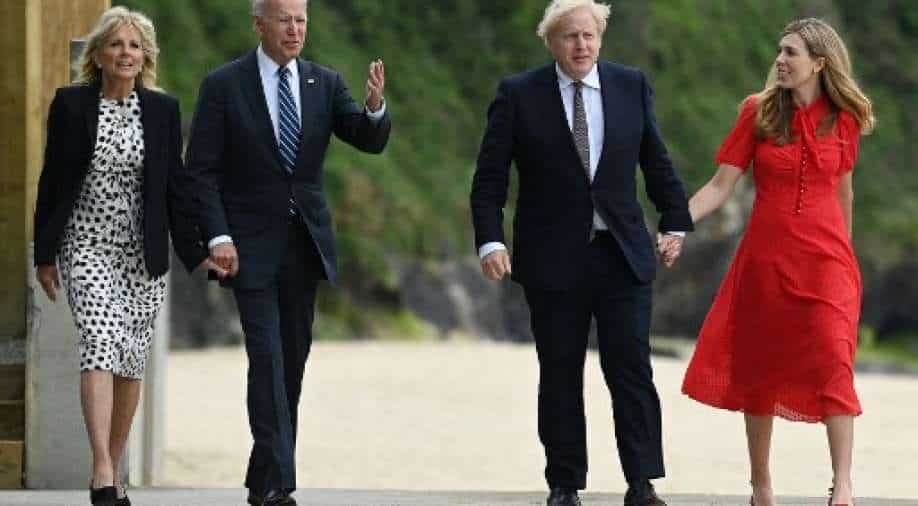 Britain's Prime Minister Boris Johnson and his wife Carrie Johnson walk with US President Joe Biden and US First Lady Jill Biden prior to the bi-lateral meeting at Carbis Bay, Cornwall Photograph:( AFP )

Both leaders engaged in the pandemic fight are seeking to further the "special relationship" between the two countries in the post-pandemic world.

US President Joe Biden met UK Prime Minister Boris Johnson at the Carbis Bay in Cornwall ahead of the G7 meeting on Thursday.

The two leaders met at the English seaside resort of Carbis bay as Biden declared: "I've been to this great country many times, but this is my first time as President of the United States."

"I told the Prime Minister that we have something in common - we both married way above our stature," Biden told Johnson jokingly, as the UK prime minister agreed: "I'm not going to descend from that one. I'm not doing to disagree with the President there, or indeed on anything else."

Both leaders engaged in the pandemic fight are seeking to further the "special relationship" between the two countries in the post-pandemic world.

In a breakthrough ahead of the G7 summit, Britain had backed the US decision to adopt minimum rates of corporate taxation as they looked to cement trade ties in the post-Brexit era.

PM Johnson earlier in the day had taken a tour of the garden of a primary school in the Cornish village of St Issey. The British prime minister will be holding the first in-person meeting of the G7 nations for the first time in nearly two years.