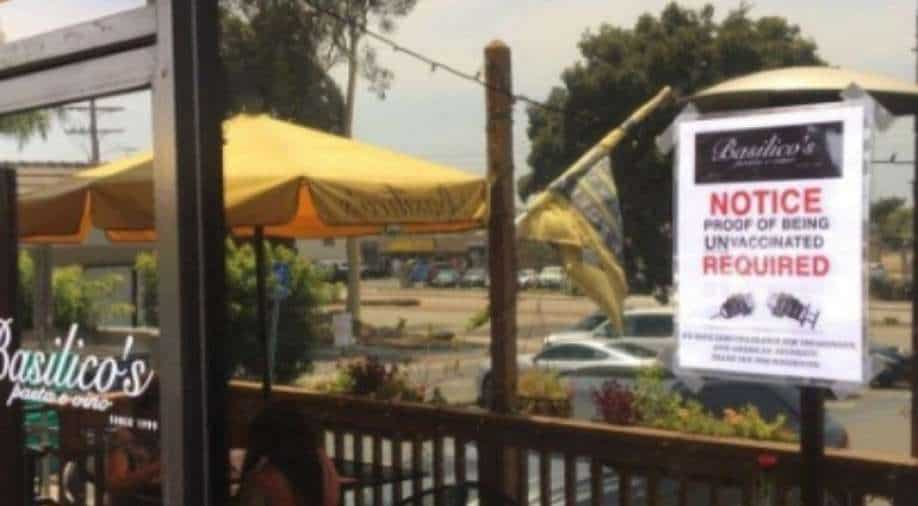 The restaurant has declared that it will only serve unvaccinated customers. As per the guidelines of the restaurant, the customers will be served only after they can show proof that they have not been vaccinated

Last year, a California restaurant became (in)famous for adopting an anti-mask policy where the eating joint asked its customers to pay extra if they want to wear masks indoors.

Now, the same restaurant has adopted an anti-vaccine policy and has decided to serve only the unvaccinated people.

Saying it is not going to promote American stupidity, Basilico's Paste e Vino, a neighborhood Italian restaurant in Huntington Beach, said, "We have zero tolerance for treasonous, anti-American stupidity."

As per the guidelines of the restaurant, the customers will be served only after they can show proof that they have not been vaccinated. However, it is still not clear that how will the restaurant check whether the customers are vaccinated or not. An employee also told Los Angeles Times, on condition of anonymity, that the servers are not really checking the vaccination statuses of customers.

Not just an anti-vaccine stand, the restaurant has also launched a movement "The Basilico's Declaration and Pledge of Defiance" in which it also encouraged other restaurants to join the movement. The restaurant is asking other eateries to remain 100 per cent open even if the government orders another lockdown. It also motivated other restaurants to “attack” the lockdowns and ban masks from their eating joints too.

"We understand that masks are the greatest weapons of the lockdowns," owner Tony Roman says in a video shared on Instagram. "They are used to divide Americans, just like the vaccination, and they represent fear, control, and surrender."