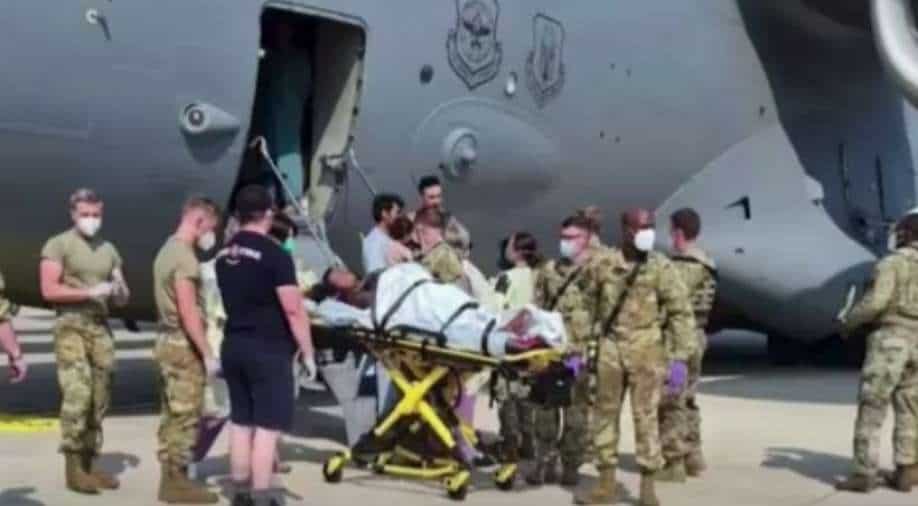 An Afghan girl was born aboard a US military plane as it landed in Germany Photograph:( Reuters )

The US military said the parents will be flying to the US after landing in Germany even as thousands wait outside Kabul airport to be airlifted from Afghanistan.

The Afghan girl who was born aboard a US military plane which unlimately landed in Germany has been named "Reach" after the aircraft's code name.

The plane landed in Germany last week as the medical staff helped the woman deliver the baby in the cargo hold of the plane.

The US aircraft was a C-17 cargo plane and the code name of the plane was Reach 828.

General Tod Wolters, head of US European Command said the parents along with the baby are now headed to the US along with other refugees who had landed in Germany last week.

At least 7,000 people have reportedly passed through US bases in Europe in the past week as the Biden administration ramped up evacuation efforts with the August 31 deadline to evacuate all personnel including Afghans looming as with the Taliban threatening "consequences" if the US did not meet its deadline date.

In Pics: Shocking images of children trapped at Kabul airport amid evacuation

At least 20 people have died at Kabul airport in the past fortnight since the US began its evacuation operations on August 14. There were reports of a gun battle between security personnel and assailants at the airport in which one Afghan guard was reportedly killed.

In harrowing scenes witnessed earlier, an Afghan youth football player reportedly died after falling off a US military plane last week as people clung to the plane in a desperate bid to flee from the Taliban.

Thousands of Afghans are still stranded at Hamid Karzai international airport as the US and its allies evacuate personnel from the airport. Several have however reached the US including Afghan interpreters who helped the American troops for the last 20 years in their fight against the Taliban.

The pressure to airlift all personnel has intensified over the past week as more Afghans entered the airport area even as the Taliban warned citizens without valid documents should go back home. The US has reportedly evacuated 88,000 people in the past 24 hours.