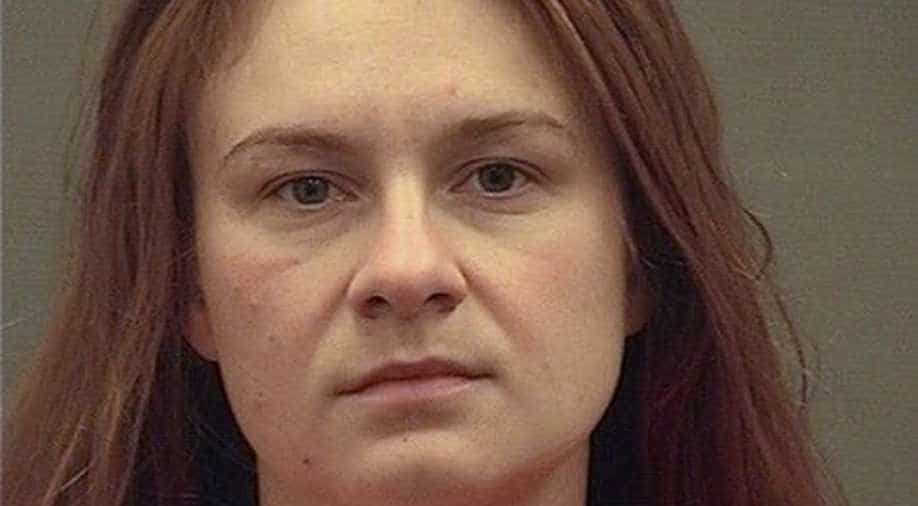 Maria Butina, a Russian former graduate student at American University in Washington who publicly advocated for gun rights, entered the plea at a court hearing in Washington before US District Judge Tanya Chutkan. She also agreed to cooperate with prosecutors.

A woman accused of acting as a Russian agent to infiltrate a powerful gun lobby group and influence US policy toward Moscow pleaded guilty to a single count of conspiracy in federal court on Thursday in a deal with prosecutors that could give them insight into Russian meddling in American politics.

Maria Butina, a Russian former graduate student at American University in Washington who publicly advocated for gun rights, entered the plea at a court hearing in Washington before US District Judge Tanya Chutkan. She also agreed to cooperate with prosecutors.

Clad in a green jumpsuit with her red hair pulled back in a long braid, Butina replied "absolutely" when asked by Chutkan if her mind was clear as she prepared to enter her plea of guilty.

Butina was charged by prosecutors in July with acting as an agent of Russia's government and conspiracy to take actions on behalf of Moscow. She had earlier pleaded not guilty before changing her plea during Thursday's hearing.

Prosecutors accused Butina, who was jailed awaiting trial, of working with a Russian official and two US citizens to try to infiltrate the National Rifle Association, a group closely aligned with Republican politicians including Republican President Donald Trump, and sway Washington's policy toward Moscow.

As part of Butina's ongoing cooperation in the case, the judge did not set a sentencing date. A status hearing was scheduled for February 12.

In the statement of offense read aloud in court, one of the prosecutors said Butina had drafted a March 2015 "Diplomacy Project" that called for establishing unofficial back channels of communication between high-ranking American politicians to help benefit Russia.

As part of that plan, she acknowledged that she conspired with two Americans and a Russian official.

Butina's lawyers previously identified the Russian official as Alexander Torshin, a deputy governor of Russia's central bank who was targeted with US Treasury Department sanctions in April.

One of the two Americans referenced in the prosecution's criminal complaint was Paul Erickson, a conservative US political activist who was dating Butina.

That statement said Person 1 helped advise Butina which American politicians she should target for meetings, and her plan was carried out on behalf of the Russian official.

"Butina opined that the circumstances were favorable for building relations with a certain US political party," the statement added, in an apparent reference to the Republican Party. "Butina predicted that the candidate nominated by Political Party #1 would likely win the upcoming US presidential election."

The "Diplomacy Project" document was crafted by Butina with help from Person 1, prosecutors said. To carry out the plan, Butina requested $125,000 from a Russian billionaire to attend conferences and set up "separate meetings with interested parties" such as other Russian businessmen or people with the Russian Ministry of Foreign Affairs, they said.

In April 2015, Butina travelled to the United States to attend a gun rights event, the description of which appears to match that of the NRA's annual meeting, prosecutors said. At that event, she was "introduced to influential members of Political Party #1," they added.

An attorney for Erickson could not be immediately reached for comment.

After she was charged, Russia labeled the case against Butina "fabricated" and called for her release. Russian President Vladimir Putin spoke about Butina on Tuesday in Moscow, a day after US court filings indicated she would plea guilty in Washington.

"She risks 15 years in jail. For what?" Putin asked . "...I asked all the heads of our intelligence services what is going on. Nobody knows anything about her."

The prosecutors in the Butina case are not from the office of Special Counsel Robert Mueller, who is investigating Russia's role in the 2016 US election and whether Trump's campaign conspired with Moscow to help him win.

Nevertheless, Butina becomes with her guilty plea the first Russian citizen to be convicted of working to shape US policy in the time period spanning the 2016 election campaign. Mueller has brought criminal charges against a series of Russian individuals and entities but those cases are still pending.

The prosecution's complaint against Butina did not mention Trump's campaign by name. Reuters previously reported that Butina was a Trump supporter who bragged at Washington parties that she could use her political connections to help people get jobs in his administration.

Butina even asked Trump a question at a gathering of US conservatives in Las Vegas in 2015 when he was running for president, querying him about American relations with Russia and economic sanctions imposed on Moscow by his predecessor, Barack Obama. Trump responded that as president he would "get along very nicely with Putin" and "I don't think you'd need the sanctions."

Trump has denied any collusion with Moscow. Russia has denied interfering in American politics.