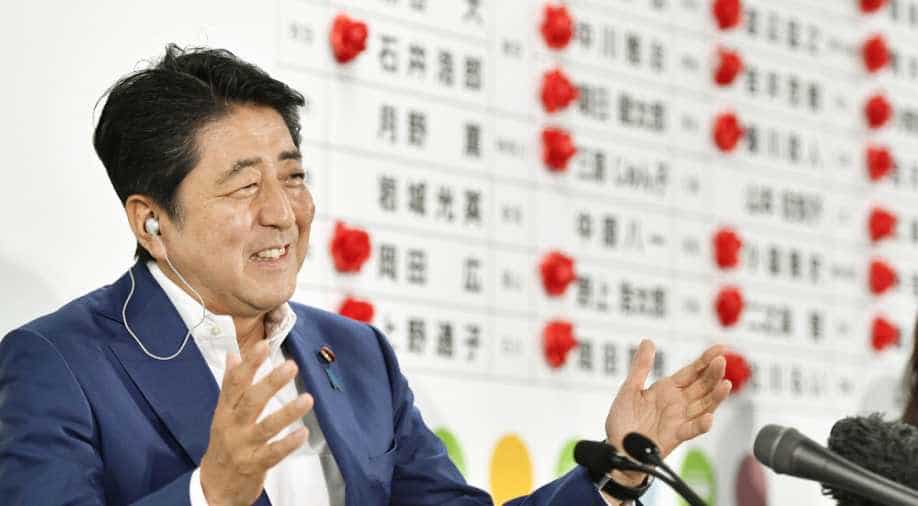 Surveys show most voters see no need to revise the constitution but Abe, whose deeper agenda has long centred on revising the US-drafted charter, may be tempted to push ahead. Photograph:( Getty )

Follow Us
Prime Minister Shinzo Abe's ruling coalition won a landslide victory on Sunday in an election for Parliament's upper house, despite concerns about his economic policies and plans to revise the nation’s post-war pacifist constitution for the first time.

Final count showed Abe's coalition, like-minded parties and independents had won the two-thirds "super majority" needed to try to revise the constitution's restraints on the military, a step that could strain ties with China, where memories of Japan's past militarism run deep.

Abe's Liberal Democratic Party (LDP) fell one short of winning a simple majority, which would have increased its clout within the coalition. Earlier projections had shown it was within their grasp for the first time since 1989.

Nevertheless, the overall victory will still bolster Abe's grip over the conservative party that he led back to power in 2012 promising to reboot the economy with hyper-easy monetary policy, fiscal spending and reforms.

In Japan, some financial market players fear that trying to amend the constitution could divert Abe's energy away from reviving the stuttering economy.

"The key question will be whether he can carry out (economic) structural reforms," said Nobuhiko Kuramochi, chief strategist at Mizuho Securities. "If Abe fails to do so despite the political freedom he has gained, that will be negative for foreign investors' appetite for Japanese stocks."

Some voters who backed Abe's LDP also said the economy's health was their biggest concern.

"Especially since I see economic growth as the priority, I have little hope for the opposition parties," said Yoshihiko Takeda, a 36-year-old IT company employee.

How big a mandate?

Abe had cast the election as a referendum on "Abenomics". With signs the strategy is failing, the government plans to compile a post-election stimulus package that could exceed 10 trillion Yen ($99 billion).

Abe declined to say how big the package might be. Economists worry the government will choose big-ticket infrastructure projects rather than implement tough structural reforms.

Abe said he would reshuffle his cabinet but did not say when or how. There has been speculation that Abe might replace finance minister Taro Aso, 75, among others.

His minister for Okinawa, Aiko Shimajiri, lost her seat, along with justice minister Mitsuhide Iwaki.

The loss in Okinawa is a slap at a US-Japan plan to relocate a controversial US-marines airbase on the island, reluctant host to the bulk of America's military forces in Japan.

Abe said he had won a mandate for his economic policies in the election, although the assertion could be weakened by low turnout. "We were given approval for our mandate to powerfully pursue Abenomics. We’d like to continue with our efforts to achieve what we've promised," he said on TV.

Kyodo news agency put turnout at about 54 per cent, a bit above the record low of 52.61 per cent seen in the last upper house poll three years ago.

The opposition Democratic Party linked up with three smaller parties, including the Japanese Communist Party, to try to stop the pro-constitutional reform camp getting a super majority. Abe's coalition already has a super-majority in the lower house.

Conservatives see the constitution as a humiliating symbol of Japan's defeat in World War II. Its admirers consider it the source of post-war peace and democracy. Revising the charter needs the approval of two-thirds in both houses of parliament and a majority in a public referendum.

"We think the constitution is something that puts limits on power, but sadly, that's not what the LDP's (revised draft) does," Yukio Edano, Democratic Party secretary general, said on TV. "If there is no common agreement on this point, then there is no platform on which we can debate individual articles."

Surveys show most voters see no need to revise the constitution and the LDP's dovish coalition partner, Komeito, is reluctant to change its pacifist Article 9. The party's secretary-general, Yoshihisa Inoue, said on TV that views in the party on possible changes had "not come together" yet.

China's official agency quickly warned that the victory posed a danger to regional stability. Commentaries by the Xinhua news agency are not formal government statements but often reflect official thinking in China, where memories of Japan's past militarism still spark outrage.

"With Japan's pacifist constitution at serious stake and Abe's power expanding, it is alarming both for Japan's Asian neighbours, as well as for Japan itself, as Japan's militarisation will serve to benefit neither side," the Xinhua commentary said.

Abe said revising the constitution was his Liberal Democratic Party's (LDP) cherished goal, but forging agreement on changes in the diverse pro-revision camp would not be easy.

Revisions require a two-thirds majority in both houses of parliament and a majority of votes in a public referendum.

"To realise revision of the constitution is my duty as LDP president," Abe told a news conference. "But it is not that easy, so I hope debate will deepen steadily."

Experts agreed that building such agreement would be tough.

"It's the first time to have two-thirds in both houses of parliament, but you can't find any issue on which the two-thirds can agree," said Gerry Curtis, professor emeritus at New York's Columbia University.

Some in financial markets worry a focus on the constitution would drain attention from the economy, but Abe promised on Monday to craft a large stimulus package.

"A public referendum is needed so he must boost support to advance revision. So for constitutional change as well, he will probably come up with a large-scale economic package," said Daiji Aoki, senior economist at UBS Securities Japan.

Doubts about Abe's policies persist even though his ruling bloc won big in terms of the number of seats. Many voters felt they had no other option, given memories of the main opposition Democratic Party's rocky 2009-2012 rule. Others stayed home.

Surveys show many Japanese voters are wary of changing the constitution's war-renouncing Article 9, which advocates see as the source of Japan's post-war peace and democracy. Conservatives see it as a symbol of humiliating defeat.

If taken literally, Article 9 bans the maintenance of armed forces. Successive governments have interpreted it to allow a military for self-defence, a concept Abe last year stretched to allow Japan's military to aid friendly nations under attack.

Formal revision of Article 9 would likely be largely symbolic - though nonetheless historic.

Convincing the Komeito party, the dovish junior partner in Abe's LDP-led coalition, to agree would be challenging. The pro-revision camp might therefore tackle another amendment first.

One possibility is a clause giving the government more power in a national emergency, a move critics say would curtail civil rights.

Another option, floated by the Komeito, would be to add an environmental protection clause. That less contentious step would nonetheless break the political taboo on revision.

It is unclear whether that would satisfy Abe's political base.

"Conservatives see the constitution as emasculating the nation," said Jeffrey Kingston, director of Asian studies at Temple University in Tokyo.