A work of destiny? After 70 years, Korean War veteran finally meets long-lost love in US 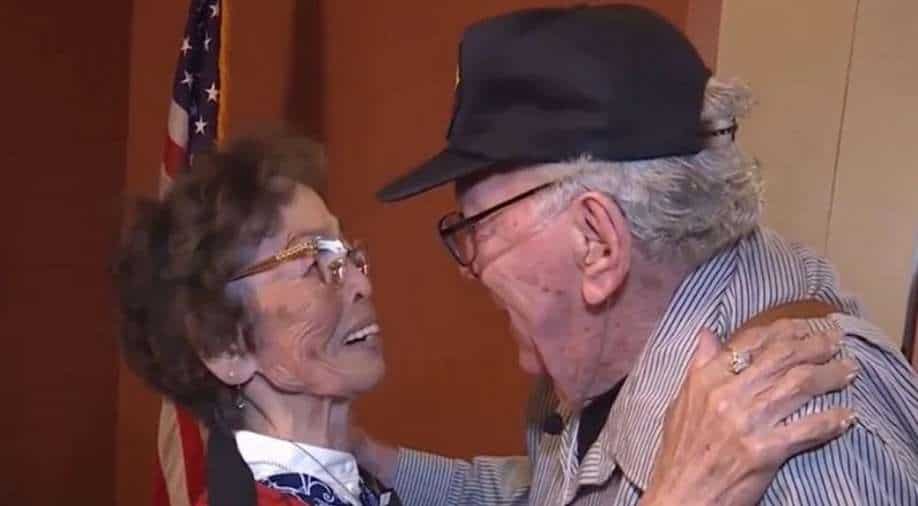 As a final attempt to unite with Yamaguchi, Mann wrote a Facebook post about their love. He said that they used to spend “a lot of time dancing together” as they fell in love. When his story went viral, 23-year-old History Channel researcher, Theresa Wong, tracked down Yamaguchi on finding a 1956 article with the headline “Tokyo Bride Makes Life in Escanaba”

Reuniting with a long-lost love after years is heavenly. This holds true for a recent meeting between a 91-year-old Korean War veteran Duane Mann and his lady love Peggy Yamaguchi, who is of the same age. Mann described the emotional meeting, which was held earlier this week after a gap of 70 years, to be a “freeing experience”. But it seems it was truly the work of destiny as he could finally track her down and get united again after several efforts.

In 1953, Navy man Mann had first met Yamaguchi in Japan, where he was stationed from 1953 to 1954. In free time, Mann used to repair slot machines at an Air Force NCO Club. In it, Peggy used to work as a “hat check girl.” The two had decided to tie the knot but Mann was discharged and sent back to the US two months early.

On reaching home, Mann found that his father had spent all savings, which he was looking to use to call Yamaguchi to the US. For some time, the couple exchanged letters until one day Mann stopped receiving any mail from her. He found out later that his mother had burnt letters as she did not want Mann “to marry a Japanese girl.”

When Mann returned to the US, Yamaguchi was pregnant. He wanted to reunite with her to tell her that he never abandoned her. He also wanted to explain why they could not unite.

As a final attempt to reunite with Yamaguchi, Mann wrote a Facebook post about their love. He said that they used to spend “a lot of time dancing together” as they fell in love.

All this while, Yamaguchi had been living with her Navy husband in Escanaba, Michigan state, the US. She had three sons.

For the two, Mann’s son and Yamaguchi’s son arranged a reunion at the Island Resort and Casino in Escanaba. The two shared their side of the story and remembered the time they spent together in Japan years ago. “I’m here to tell you that I didn’t abandon you at all. I just couldn’t find you,” Mann told Yamaguchi.

He also showed Yamaguchi her photos that he had kept in his wallet for 70 years. “Thank you for remembering and [saving] all the pictures, you must have loved me,” Yamaguchi said while hugging and kissing Mann.