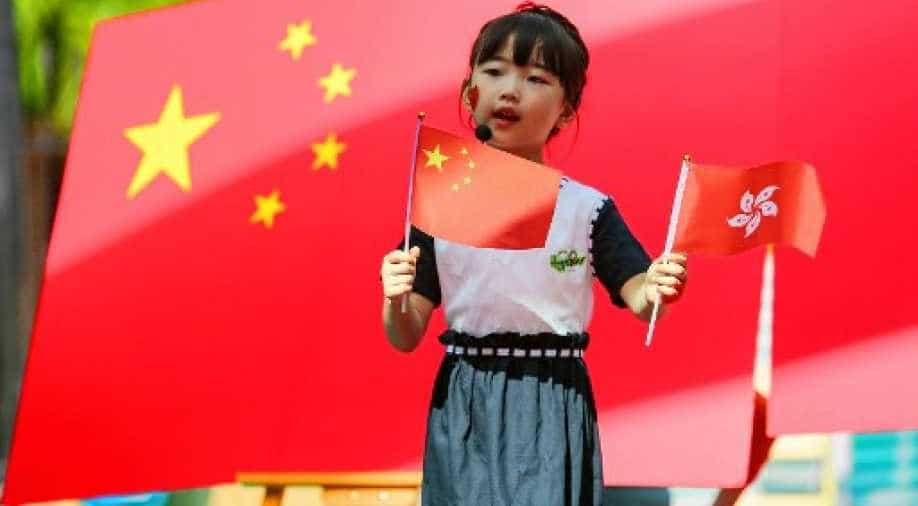 The video, which officials said would be used to teach primary school students, is part of a broader push to overhaul school curriculum after months of fierce anti-government protests in 2019

First come the colorful visuals: an animation of Hong Kong’s skyline, like the opening sequence of a children’s show. Then, a grinning girl and boy pop up on screen, sandwiching a cartoon owl wearing a graduation cap and round spectacles. Together, they deliver an unusual exhortation.

So begins a chipper video unveiled by the Hong Kong government this week to instill patriotism, loyalty and a strict love for the law in its youngest residents.

Over the next seven minutes, the boy and girl, led by “Uncle Owl,” take a whirlwind tour through dangers facing Hong Kong, such as terrorism and hostile foreign powers. They learn about the forces guarding them from those dangers: Hong Kong police and, ultimately, the central Chinese government.

Also read| A ‘masculinity crisis’? China says the boys are not all right.

“We are still young. How can we contribute to our society and country?” the boy asks, a thought bubble floating over his head.

“I know! We must be law abiding,” the girl responds as a lightbulb pops up above her with a ding.

The video, which officials said would be used to teach primary school students, is part of a broader push to overhaul school curriculum after months of fierce anti-government protests in 2019.

Students made up nearly 40% of those arrested during the height of the demonstrations, and many officials accused teachers of corrupting young minds and turning them against Hong Kong and China. The Education Bureau promised to root out “black sheep,” especially after Beijing imposed a sweeping national security law in June.

Now, it has shown how it plans to do so — starting with students as young as 6.

“Kind of speechless,” Carson Tsang, a high school student and spokesman for Hong Kong Ideologist, a student activism group, said of the video, adding that he did not see the need to teach students that young about national security.

The video was released late Thursday alongside dozens of pages of guidelines for how schools are advised to offer instruction on the new national security law. The rules specify that elementary school students should learn about how the People’s Liberation Army protects them and the importance of central government agencies operating directly in the city — a new provision under the law.

Previously, Chinese authorities had remained largely in the background in Hong Kong, a former British colony that was promised a high degree of autonomy when it returned to China in 1997.

Secondary school students will study the particulars of the law, with national security education bundled into subjects as wide-ranging as biology and geography. Teachers are told to emphasize that “the campus is not a place for expressing political aspirations,” and to tell students that “as far as national security is concerned, there is no room for debate or compromise.”

School officials should call the police on students or teachers if a situation became “grave,” the guidelines say. Activities that could prompt law enforcement intervention include chanting slogans, singing political songs and wearing clothing with political messages.

“It is definitely not too early to start from primary school,” Kevin Yeung, Hong Kong’s education secretary, told reporters Friday. “We can start from simple things first. In middle school, we can study further.”

Compared to the stern admonitions of the guidelines, the video — with its whimsical sound effects, pastel hues and cutesy animations — appears approachable, even mild. But its message for its young viewers is no less clear about China’s vision for Hong Kong.

The owl opens by affirming that “we all know Hong Kong is an inalienable part of our country” — a rebuttal to activists who have called for Hong Kong to become independent. The owl then gestures to a map of China, with a dotted line also claiming Taiwan and contested parts of the South China Sea as Chinese territory.

Next, the owl outlines the crimes that the security law lays out: Subversion, it says, without defining the term. Terrorism, with an animation of exploding dynamite. Collusion with a foreign country, which is illustrated by a silhouette of a person holding money bags and being controlled by puppet strings.

Later, the owl uses terms that his young audience might better understand. “Imagine if some students did whatever they wanted in the school, like skipping classes and running around here and there,” it suggests. “What would the lesson be like?”

The owl also compares the national security law, which defines crimes that could be punished with life sentences, to the expectation that people will not blast music at night. “While we are enjoying rights and freedoms, we must consider the impact on others,” it says. The girl, who has been bobbing happily in front of speakers, dutifully puts on headphones.

On social media, some mocked the video for expecting elementary school students to understand words such as inalienable and promulgation. Others worried that it could still be highly effective.

Tsang, the student activist, said young children who were exposed to materials like the video would not learn to question official narratives.

“Eventually, the government trains the minds of primary students,” he said, adding that teachers would be loath to push back for fear of violating the law themselves.

Ip Kin-yuen, a former lawmaker who represented the education sector, denounced the guidelines more broadly, asking why there had been no public consultation period.

Ip said he was not opposed to the idea of teaching students about national security. But he said the government guidelines appeared aimed at indoctrination rather than instruction.

“If we are going to have national security education, it should be education,” he said. “It should be real, genuine education that is for opening up the minds of the students, not to suppress them.”