Watch: In the aim of going viral, an Indonesian man 'marries' a female goat 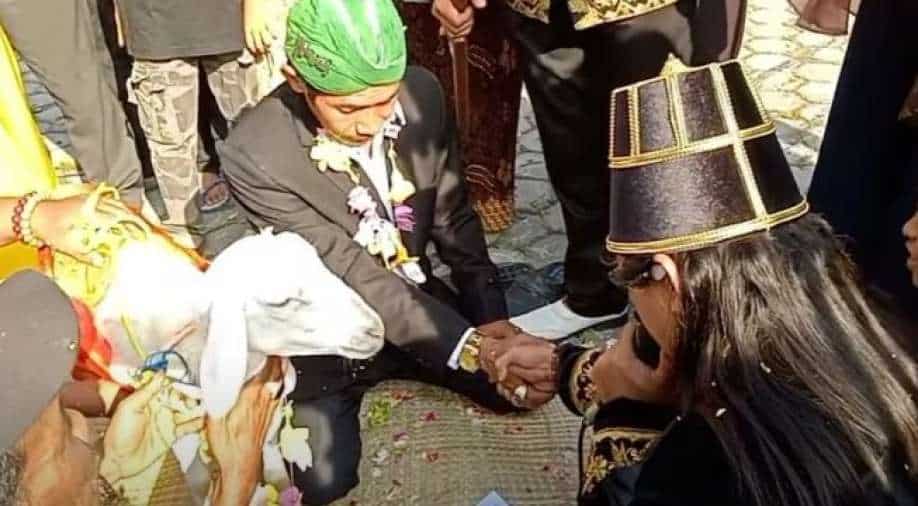 In the video, the bride is seen covered in a shawl. A group of locals donning traditional Javanese costumes attended the wedding ceremony. Photograph:( Twitter )

On social media, a video of an Indonesian man'marrying' a goat has gone viral. He stated that the video was made with the goal of becoming viral after it provoked controversy.

An Indonesian man from Gresik, Jawa Timur, became popular on social media after marrying a female goat on June 5, 2022. In a video that has gone viral on the Internet, a number of local citizens can be seen dressed in traditional Javanese clothes, attending the wedding ceremony. The goat was also given a scarf and other bridal decorations.

The wedding of Saiful Arif, 44, and the goat, Sri Rahayu bin Bejo, was seen by guests at the ceremony. Saiful can also be heard in the video reciting the akad nikah, which claims that the dowry was only 22,000 rupiah. Surprisingly, the wedding ceremony appeared to have taken place at the home of a local politician.

Saiful Arif was forced to come forward with the truth and apologise for his behaviour when the video generated an unanticipated backlash among netizens.

Saiful stated that the video was only a ruse and that it was made solely for entertainment purposes. He desired the contentious behaviour to go viral.

This was done solely to raise the number of likes and views on the page.Furthermore, Saiful maintained that he did not want to offend anyone with the video's composition and that it was solely for the amusement of the viewers.