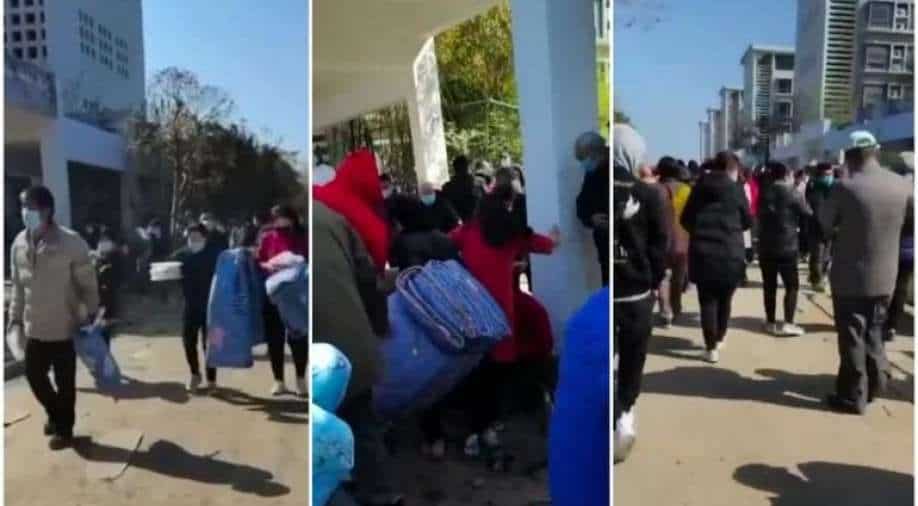 In this combination of images, chaotic scenes can be seen at the Nanhui quarantine site in the Chinese city of Shanghai Photograph:( Twitter )

The lockdown in Shanghai has created a situation of panic, with people rushing to acquire as much as possible before they are unable to do so

In a new video that has gone viral on social media, chaotic scenes can be seen at the Nanhui quarantine site in the Chinese city of Shanghai.

People can be seen complaining about the insufficient staff and shortage of food at the isolation site amid a lockdown in the city.

They are fighting over limited resources such as water, food, and blankets which are considered basic necessities.

The video has been shared thousands of times on Chinese social media platforms such as Weibo and WeChat.

A Chinese user who shared the video said, ''If you can, please help us expose (the situation). It's so scary...nobody is managing the stuation properly.''

Several people at the designated field hospital could not get any of the supplies being distributed because, by the time they reached the front of the queue, nothing was left.

The lockdown in Shanghai has created a situation of panic, with people rushing to acquire as much as possible before they are unable to do so.

Complaining about the horrible conditions at the quarantine site, another Chinese social media user wrote: “Can you take a look at the Nanhui hospital site, my mum tested positive and was at home for a week laying low and she recovered, yet they still recklessly took her away.''

''When she arrived she had to snatch a room for herself, nothing was fixed, people testing positive and negative all mixed together, there was no hot water, no healthcare workers, no nurses, there was nothing. People had to fight over food and water, the chaos and confusion was over the limit.''

As Shanghai battles the Omicron wave amid the lockdown, China's state-run Global Times said authorities had deployed 38,000 health workers during testing which is the largest number of medical aid since the virus broke out in Wuhan over two years ago.

Medical workers were sent from at least 15 provinces, the state-run newspaper informed.

The newspaper added that health workers had achieved the "mission impossible" as they finished sampling of 25 million residents. All Shanghai residents had taken nucleic acid coronavirus test on Monday which was the largest COVID-19 exercise so far in China.

Health officials said that after the sampling, testing and review will take place. The authorities have asked residents to remain at home until test results are announced.

China continues to stick with its "zero-COVID" policy, however, the number of coronavirus cases has reached record levels in the past month surpassing cases recorded two years ago when the virus was first reported in Wuhan. Health officials in Shanghai conducted antigen testing in the city in a bid to cut the transmission chain.

The present wave is being led by the Omicron variant as officials revealed they had detected a new Omicron subtype in Suzhou near Shanghai tentatively calling it BA.1.1.