You think you can keep me quiet: Virat Kohli goes after SA counterpart Dean Elgar in 3rd Test - WATCH 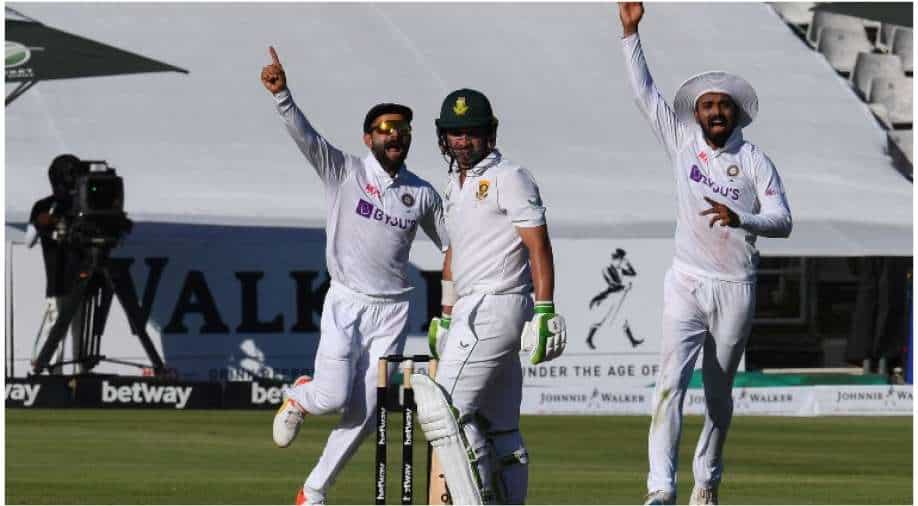 During SA's 212-run chase, on Day 3 (January 13), Kohli tried to get under the skin of his counterpart Elgar and sledged him to deter his concentration. Here's the video of Kohli's ruthless:

Virat Kohli-led Team India lost the third and final Test versus Dean Elgar's South Africa on Friday (January14) to lose the series 2-1, despite a 1-0 lead. Defending 212, India struggled to dismiss the SA batters as the Elgar-led hosts romped past the No. 1 ranked Indian team to win the contest by 7 wickets and clinch the series 2-1.

The series was a highly intense affair and a great exhibition for Test cricket lovers. The likes of Keegan Petersen, Marco Jansen, Kagiso Rabada, Lungi Ngidi, Duanne Oliver, Elgar, Temba Bavuma stood tall for the Proteas whereas Jasprit Bumrah, Md Shami, Shardul Thakur, Rishabh Pant, KL Rahul did well for the visiting line-up. Nonetheless, there were also plenty of heated exchanges between the two sides during the course of the three Tests.

During SA's 212-run chase, on Day 3 (January 13), Kohli tried to get under the skin of his counterpart Elgar and sledged him to deter his concentration. The 33-year-old Indian captain claimed that Elgar was trying to avoid facing premier pacer Bumrah and even reminded him of the J'burg Test -- played on a tricky surface -- between both nations in early 2018.

Kohli's sledge was caught on stump-mic where he said, "Unbelievable. Just after a Man of the Match performance in the last game, running from Jasprit...Chirping for 13 years Dean, you think you gonna keep me quiet? We all know who wanted the match called off in Jo'burg 2018. We all know that." Here's the video of Kohli's ruthless slegding of Elgar:

ALSO READ | [VIDEO] 'You go after someone who is 5 years younger': Kohli gives it back to Van der Dussen in 3rd Test

After the end of the three Tests, India were deprived of winning their maiden series, in whites, on South African soil as the home side came from behind to win 2-1.

Hence at the post-match presentation, Kohli told the broadcasters, " I think it's a great spectacle of Test cricket for all to see. We played well in the first game to win but South Africa bounced back well in the second and carried on the momentum in the third as well. There was some lapse of concentration from us as well in key moments. I thought South Africa performed better in those key moments and totally deserved the win."

On the other hand, Elgar stated, "Pretty elated. Obviously will sink in a day or two, maybe this evening. Really proud. We were thrown under the sword quite a few times this series and the guys responded brilliantly. Obviously, to bounce back after losing the first game, to believe that we could still win. Extremely happy. (On how things turned around) Challenging your players, you need characters within the group and the bowling unit has been excellent all series. I had put up a challenge after the first game and the guys responded brilliantly. Helps to have a group that doesn't have any real big names, they like to rally together and play as one. And that's crucial. Extremely proud of this group of players that we have here."