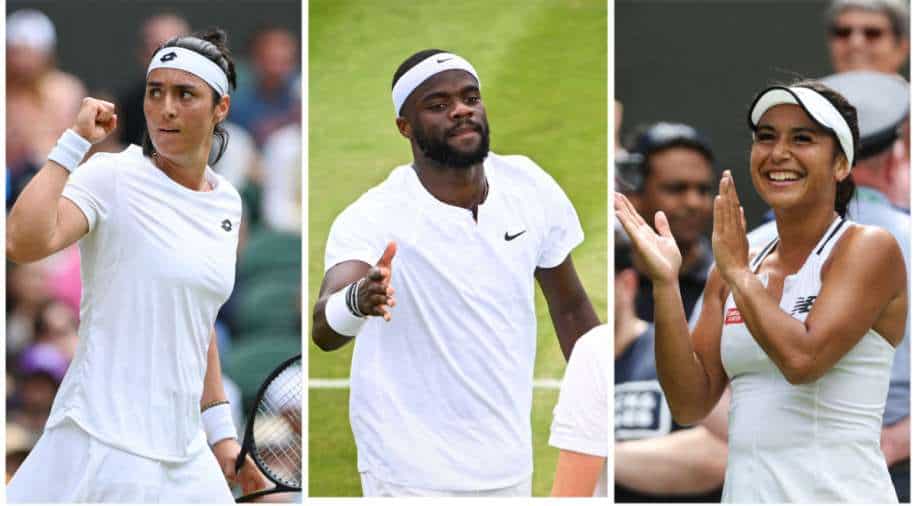 Britain`s Heather Watson reached the fourth round of a Grand Slam tournament for the first time in 43 attempts over 12 years on Friday as she beat Slovenia`s Kaja Juvan 7-6(6) 6-2 in front of a barely believing crowd on Wimbledon Court one.

Ons Jabeur was kept on court for more than hour - but only just - as the speedy Tunisian dispatched former junior number one Diane Parry 6-2 6-3 on Friday to reach the fourth round at Wimbledon. The world number two has shown little mercy during her progress to the third round, spending less than two hours on court. Had she not been broken by Parry when serving for the first set at 5-0 up, she would have made it into the last 16 in less than three hours on court during the first five days of the grasscourt major.

That break not only earned 19-year-old Parry, one of four Frenchwomen to reach the third round, a rousing ovation from the Centre Court crowd but boosted her confidence as she raised her game to hit some sublime one-handed backhand winners. Although the teenager could not rescue the first set, which Jabeur sealed with an ace, she stayed toe-to-toe with the third seed in the second set until 3-3.

It was at this point Jabeur moved in to deliver the knockout punch as she broke Parry to love and moments later she was celebrating her passage into the fourth round -- having been kept on court for 68 minutes.
She will next meet either 2018 Wimbledon champion Angelique Kerber or Belgian 24th seed Elise Mertens.

American 23rd seed Frances Tiafoe kept his focus in the face of an Alexander Bublik circus act on Friday to reach the Wimbledon fourth round for the first time. The 24-year-old punched the air with delight as a Bublik double-fault sealed a 3-6 7-6(1) 7-6(3) 6-4 victory in front an enthralled audience on Court Two.
Kazakhstan`s Bublik is one of the great entertainers in men`s tennis -- a rival to Nick Kyrgios in terms of trick shots but without the scowls and controversy.

Bublik held the upper hand when he took the opening set but Tiafoe stuck manfully to his task and won the second on a tiebreak before doing the same in the third. Bublik appeared to have thrown in the towel when trailing 3-0 in the fourth but it was just a ruse.

The world number 38 delivered virtually every first serve under arm in the following game and when most of them failed to land in the box he followed up with 130mph second serves. There was also pure genius from Bublik, including a no-look drop shot and scorching baseline winners, and he miraculously retrieved a lob to win a magical rally and break serve, before squaring the set at 4-4 with a booming ace.
Tiafoe looked in danger of being suckered in to the Bublik sideshow when he faced a break point at 4-4 but the American banged down an ace and held with a drop shot reply to a Bublik serve return drop shot, getting a clap from his opponent.

The crowd wanted the match to go on, such was the level of entertainment, but Bublik could not hold. He left the court smiling and to huge cheers, while Tiafoe can now look forward to a more conventional test against either David Goffin or Ugo Umbert. Tiafoe is only the third active American male player to reach the fourth round at a Grand Slam on four occasions, the others being John Isner and Sam Querrey.

Britain`s Heather Watson reached the fourth round of a Grand Slam tournament for the first time in 43 attempts over 12 years on Friday as she beat Slovenia`s Kaja Juvan 7-6(6) 6-2 in front of a barely believing crowd on Wimbledon Court one. Watson, 30, has slipped to 121st in the world rankings and fourth in Britain and although she has tasted notable success in doubles, she has never been able to sustain a challenge in singles at the top level, her best Wimbledon performances being reaching the third round three times.
She came through an awkward first set full of slices and drop shots against 21-year-old Juvan and did not let her head drop after blowing three set points in the tiebreak before taking it 8-6 on a double fault by the 60th-ranked Slovenian.

Energised, Watson blasted to a 5-0 lead in the second set, adding power and confidence to her groundstrokes, and though Juvan launched a late rally, Watson prevailed to cap a week to remember in which she has been on court five days in a row after her first two matches ran into second days.

Brett Lee recalls fierce battles with Virender Sehwag: 'If one Sachin wasn't enough, we've got another'