Wimbledon 2021: Novak Djokovic-Matteo Berrettini gear up for showdown with title on line 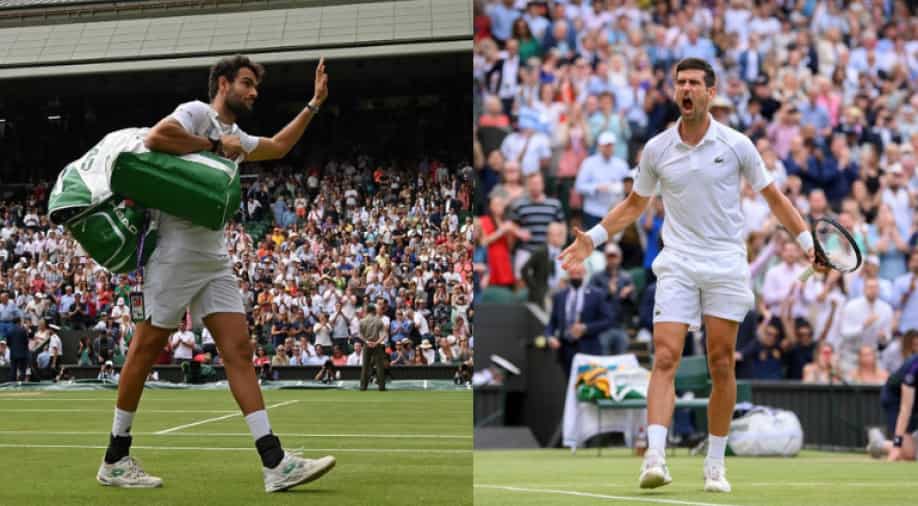 The match between Novak Djokovic and Matteo Berrettini with a Wimbledon title at stake promises to be a nail-biting clash.

Competing for his sixth Wimbledon title, Novak Djokovic will take on Matteo Berrettini in the final showdown of the English Grand Slam at SW19 on Sunday.

Novak Djokovic is a two-time reigning Wimbledon champion and is on a run with 20 successive wins at the competition. He has additionally won both the Majors to have occurred in 2021 up until this point, which implies he is on course to finish the Calendar Grand Slam.

Matteo Berrettini, in the meantime, has been viewed as one of the strong competitors since the beginning of the tournament. He has a model record on the grass, and he came into Wimbledon having won 17 of his keep going 19 matches on a superficial level including a title run at Queen's last month.

This will be the third time that Novak Djokovic and Matteo Berrettini battle against one another. The head-to-head on is 2-0 for Novak Djokovic, yet they have never played each other on grass.

Discussing the service games, he impacted eight aces and he committed just five double faults. In general, Novak Djokovic was very proficient on serve to win 81% of his first serve and 57% on the subsequent serve. Nonetheless, this didn't forestall his to surrender the service once. He broke Denis Shapovalov multiple times after changing over 30% of his breakpoints.

As far as service games are considered, he covered his rival with 22 aces and he committed just one double fault. Matteo Berrettini was very successful on serve to win 86% of his first serve and 61% on the subsequent serve. This was the fundamental justification for not yielding a solitary break during the match. He broke Hubert Hurkacz multiple times in the wake of changing over 60% of his breakpoints.

Novak Djokovic might not have been at his best in this competition, however, his interesting qualities have permitted him to enroll a progression of agreeable successes. He has been the best returner at the Championships up until now, and his service has likewise been effective.

Matteo Berrettini, on his part, has been strong all through the competition. His hostile style of play is appropriate to grass as a rule, yet he has utilized his weapons sharply at Wimbledon this year.

The match between Novak Djokovic and Matteo Berrettini with a Wimbledon title at stake a nail-biting clash beckons.