What Rishabh Pant did against Anderson, Archer is outrageous, say Dilshan and Maharoof 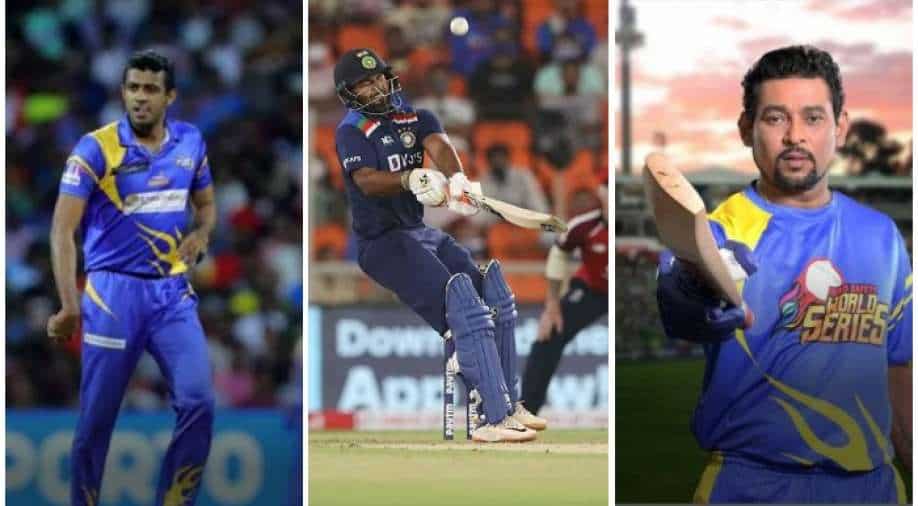 What Rishabh Pant did against Anderson, Archer is outrageous, say Dilshan and Maharoof Photograph:( Agencies )

The inventor of ‘Dilscoop’ - Tillakaratne Dilshan – and Farveez Maharoof have lauded the fearless approach of Rishabh Pant and other youngsters as the new-gen continue to innovate and entertain the crowd with their batting while also helping their respective teams win matches across formats.

The T20 format has helped the game of cricket evolve over the years. From the days when players used to be conservative about their shot-selection to youngsters playing fearless and glitzy shots, cricket has come a long way since the introduction of T20 cricket.

Former Sri Lankan batsman Tillakaratne Dilshan was the first player to play the scoop shot - over the wicket-keeper, against Australia in 2009 World T20 - which later became famous by the name of ‘Dilscoop’. Since then, the world of cricket has seen a plethora of innovative shots with the latest being Rishabh Pant's masterclass against England pacers James Anderson and Jofra Archer.

The inventor of ‘Dilscoop’ - Dilshan – has lauded the fearless approach of Rishabh Pant and other youngsters as they continue to innovate and entertain the crowd with their batting while also helping their respective teams win matches across formats.

Pant, who unleashed the reverse-swat, first against veteran pacer James Anderson in the fourth Test in Ahmedabad, left everyone flabbergasted by his sheer audacity to attempt the stroke against England's leading wicket-taker. But that was not enough, the youngster played a similar stroke against Jofra Archer when the England pacer was bowling at close to 150kph to leave everyone awestruck.

Dilshan said he is extremely delighted to see youngsters showing confidence in their ability and are not taken aback by the pace or class of the bowler.

“I think it's really good. Since the introduction of T20 cricket, few youngsters do different things on the field. For example, I tried to invent Dilscoop now people have tried to play the reverse sweeps, switch hits, paddles, etc. I think it is really a good thing that they are challenging themselves. I feel if any good cricketer can take that challenge, that's really good for the game to advance. It can go a long way. We can see not only in T20s or one-dayers but now even in Test cricket young cricketers try to take some chances by playing reverse sweeps and reverse paddles,” Dilshan answered to a WION query during a media interaction.

“It is really good that they have the confidence to do these kinds of things. They have confidence that's why they are doing it. The best thing is to enjoy it when you are trying different things and not think much about failures. The crowd wants to see different things from newcomers. I'm really happy that young cricketers are trying innovative things. I'm really happy,” Dilshan, who scored 10,290 ODI runs for Sri Lanka, added.

No big deal - just a 144km/h ball from Mitchell Starc being ramped over the keeper's head for six! A bit of wizardry from Tillakaratne Dilshan, who turns 44 today pic.twitter.com/KnmOxWz2kd

But as a bowler, how do you deal with such players and strokes? Former Sri Lanka seamer Farveez Maharoof weighs his opinion as he said that the key is to follow batsmen till the last moment and adjust your deliveries accordingly. Maharoof went on to heap praise on Rishabh Pant as the former Sri Lankan international labelled Rishabh Pant's shots as ''outrageous''.

“I personally think that for any bowler, bowling to guys like Rishabh Pant or what Dilshan did in those days, is very difficult. What Rishabh just did recently is just outrageous. You know, bowlers bowling at around 150kph and having the guts to do that, it is unbelievable,” Maharoof answered a WION query.

“So basically, as a bowler, when I bowl at even this age, I follow the batsman till the last moment. So, if I see a batsman moving around in the crease, that is the easiest time to bowl into a batsman because you know what exactly is going to do. But what happens with these switch-hits, reverse paddle, Dilscoop, is it's at the last moment. So, the bowler has to release then the player plays his stroke. So that's where the fine line comes in. It's also a matter of having experience playing T20 cricket because we all know that bowlers are under the pump when it comes to T20 cricket. So, firstly you got to do the basics properly. And then think of you know how to tackle the especially guys like Dilshan and Rishabh, who play outrageous strokes,” the former Sri Lankan seamer explained.

Dilshan and Maharoof are in India to participate in the Road Safety World Series and are representing Sri Lanka Legends. The tournament features some of the biggest names in world cricket with the likes of Sachin Tendulkar, Kevin Pietersen, Brian Lara among many others gracing the cricket field.

Furthermore, Zee5 HiPi; a new Indian short-video platform, recently announced its association with the Sri Lanka Legends team. As a part of the partnership, the Sri Lanka Legends team will be sporting the HiPi logo on the leading side of their helmets and caps. The players will be performing various hashtag challenges in order to engage with the audience. The challenges will be related to cricket & fitness and will be curated in a way that is easy to perform and fun to participate in.

“The association gives good exposure to the cricket team as well. And it's a good innovation overall because it gives us a platform where we can discuss things, and answer questions from the fans. There are a few things in the audience's mind or the fans have questions which the media persons ask us and through this association, we would be able to satisfy them and their queries,” Sri Lanka Legends CEO Yash Sardesai said.