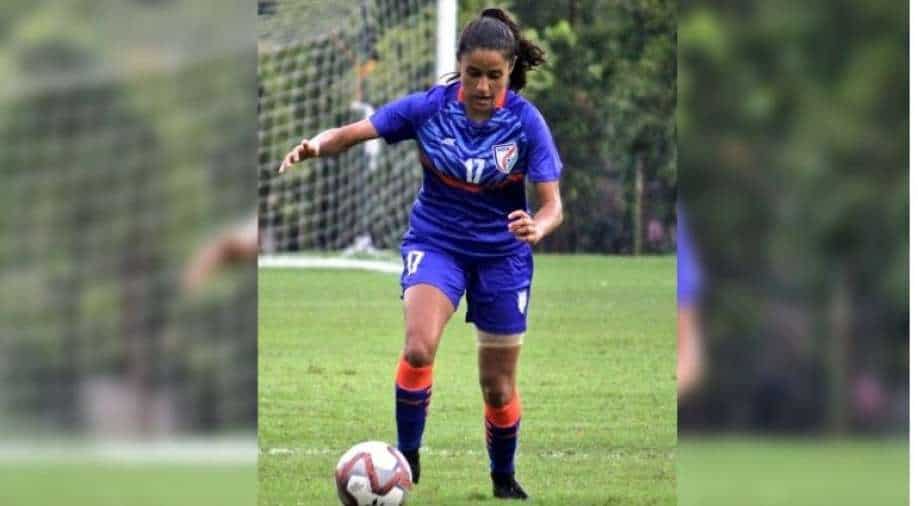 Dalima Chhiber will play for India in historic match against Brazil on Friday. Photograph:( Twitter )

India is all set to play against the previous World Cup runner-up Brazil on Friday, followed by a match against Chile on November 29 and then will take on Venezuela on November 30 with all the matches set to be played at the Arena da Amazonia in Manaus, Brazil.

Dalima Chhibber, the defender for the Indian women's team, said that the Indian team won't fear any of their opponents and will play their best game.

She further cautioned the Indian team about a 'different style' of play from these opponents but she is hopeful of gaining good exposure and experience through these games.

Dalima is excited to play the South American opponents, especially Brazil, during the four-nation event, which begins here on Friday.

"Playing against Brazil is very exciting because as a kid growing up, my father who is a football coach now, who used to be a football player as well, he was a big fan of Brazil men’s national team and he would watch them play in FIFA World Cup and that is how I got to know about FIFA Women’s World Cup and Brazil Women’s Football team," said Dalima Chhibber.

ALSO READ: When and where to watch India vs Brazil football live on TV and online streaming?

Brazil's Marta is widely regarded as the best female footballer in the world. Commenting on Marta's influence, Chibber said, "Since my childhood, I've looked up at Marta, Formiga, and the fact that they're still playing and setting records even at this stage is so inspiring which defines that age is just a number. And it shows that if you’re ready to work hard and put your best foot forward, you can achieve whatever you want."

"Formiga is gonna be retiring in the game against us makes it even more special because a player who I've idealized, who I've grown up looking at, knowing the fact that she has played seven World Cups which is a big number. I'm looking forward to meeting players who play the FIFA World Cup and playing against side which is competing in all the FIFA World Cups, it’s gonna be very exciting."

Dalima Chhibar, the team's defender, is looking forward to the team's trip to Brazil. She said, "As a team, we’ve never travelled to South America and playing against teams like Venezuela, Chile and Brazil who’re all ranked higher than us is very good exposure, and to travelling to another continent, where the team hasn’t been exposed to will be a very good experience."

Talking about the competition, the Indian team will face against them, she said, "I personally expect them to put their best foot forward. I know one thing for sure that they’re gonna come strong. The players from those teams are very strong physically and they’re very skilful as well.

The Delhi player has first-hand knowledge of the American football style, having played for the Canadian club Manitoba Bisons from 2019 until recently.

"By playing in Canada, I’ve had the opportunity to play with and against players from the US, Mexico, Chile. I’ve seen their style of play and it’s very different how it is played in Asia, and these teams won’t leave any stone unturned."

Chhibar looks pumped up for the upcoming tournament and said, "Going into four nations tournament, I expect a very tough fight from all the teams, but we’re not gonna fear any of our opponents. We’re gonna put the best foot forward with our best performances."

Taking experiences from prior tours, she said, "The matches in UAE, Bahrain and Sweden have helped us a lot, as the team came together after a long time and we could get match experience and exposure playing against different opponents and tougher opponents. The game time helps us reflect on our performances individually as well as the team."

"We're building for a very important tournament which is Women’s Asian Cup and we need to understand our performances and we need the game time and experience as a team. It’s very necessary to understand and test what we are capable of as players and as a team because the women's Asian cup is a very crucial tournament for us and we definitely aim to perform very well there and hopefully qualify for the FIFA World Cup."