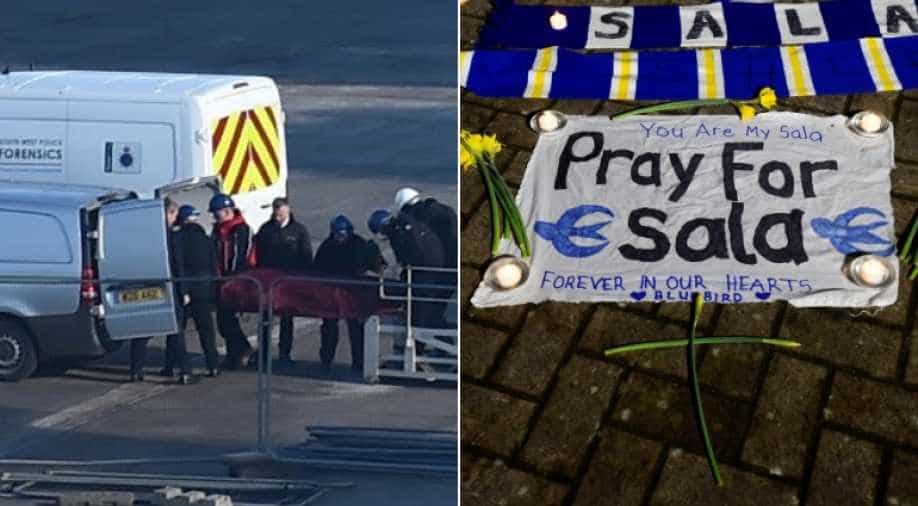 A body is taken off the Geo Ocean III, recovered from the wreckage of a plane carrying Argentine footballer Emiliano Sala at Weymouth harbour, south west England on February 7, 2019 (L). Photograph:( AFP )

'We can now begin to mourn our son and our brother,' the Argentinian player's family said in a statement.

The family of Cardiff City footballer Emiliano Sala said Friday they could now begin mourning after his body was formally identified following its recovery from a crashed plane in the Channel.

"We can now begin to mourn our son and our brother," the Argentinian player's family said in a statement, also thanking everyone involved in the effort to locate the submerged wreckage off Guernsey.

"We would like to thank you for all of your signs of affection and support in the most painful time of our life," the family said.

"To see everyone doing everything possible to join us in the search has been a precious help to us."

The family said their thoughts were also with the family of the 59-year-old pilot of the plane, David Ibbotson, whose body has not yet been found, saying "we hope the authorities do everything possible to find him".

Sala had returned to France to say goodbye to his teammates at Ligue 1 club Nantes and was flying to Wales on January 21 to join up with his new club following his 17-million-euro ($19.3 million) transfer.

The plane, a Piper PA-46 Malibu, vanished from radar around 20 kilometres (12 miles) north of Guernsey.