'We are like family': Pakistan star Mohammad Rizwan hails Virat Kohli, calls him number one in the world 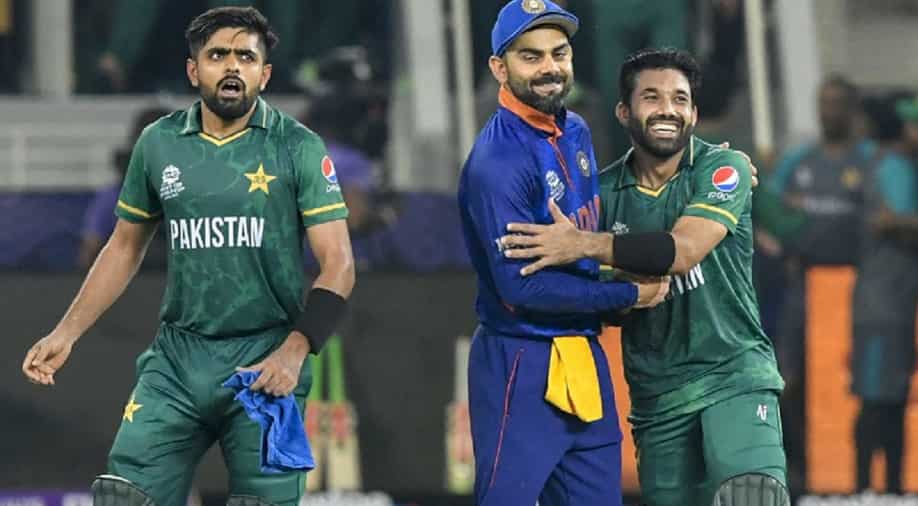 Mohammad Rizwan hailed Virat Kohli as the best in the world. Photograph:( AFP )

Star Pakistan batter Mohammad Rizwan hailed Virat Kohli as the best batter in the world as he opened up on his equation with the Indian Test skipper. Rizwan and Kohli had come up against each other during India's blockbuster clash against Pakistan at the T20 World Cup 2021 last year.

Rizwan had slammed an unbeaten half-century along with Pakistan skipper Babar Azam to help their team earn a comprehensive win by ten wickets against India. It was a dominant performance from the Men in Green, who chased down the target of 152 runs with 13 balls to spare without losing a single wicket.

Rizwan, who was the hero of Pakistan's ten-wicket win against India, revealed he shares a great bond with Kohli, who was leading Team India in the T20 World Cup 2021. The Pakistan wicket-keeper batter also revealed an interesting anecdote from the game.

“No doubt Virat Kohli is number one in the world,” Rizwan told Paktv.tv.

“When we play cricket, we are all like a family. When we took a review against Pant after he played a reverse sweep, he (Kohli) said are you trying to get all of us out in 10 overs?" - he added.

Pakistan bowlers were on top of their game against India right from the word go as they sent the opening pair of Rohit Sharma and KL Rahul cheaply inside the first three overs before Suryakumar Yadav was dismissed in the sixth over. Kohli's 57 and Rishabh Pant's 39 helped the Men in Blue post 151 runs on the board.

Babar (68) and Rizwan (79) slammed unbeaten half-centuries apiece to take the Men in Green home comfortably. Rizwan revealed a lot was said from Kohli's end during Pakistan's run-chase but refused to dwell into the details of the conversation.

“When we were batting, he also said a few things. I can’t repeat the things that were said, but all I can say is that he is a really nice guy," Rizwan said.