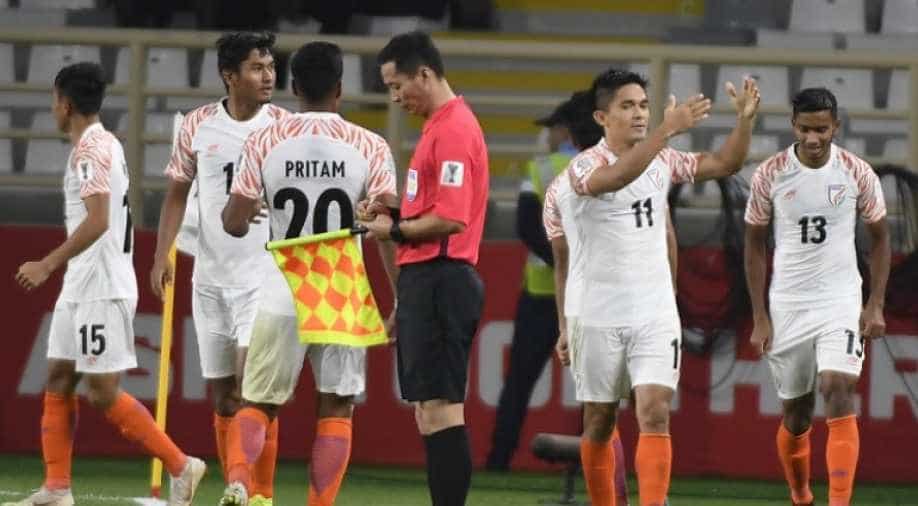 India cruised past Thailand 4-1 in Group A at the AFC Asian Cup in Abu Dhabi.

India cruised past Thailand 4-1 in Group A at the AFC Asian Cup to register their first victory in the Asian Cup since 1964.

Sunil Chhetri and co. celebrated the win with the fans at the Al Nahyan Stadium in Abu Dhabi.

The video went viral, in which team India spotted celebrating with the fans and doing the famous Viking clap.

The video was posted via Twitter with a caption, "Nothing beats postmatch celebrations with the fans."

India captain Chhetri, who was playing in his second Asian Cup, made no mistake from the penalty spot after Theerathon Bunmathan's handball in the 26th minute.

Also Read: All you need to know about Asian Cup 2019

Chhetri found the net again in the 46th minute, Anirudh Thapa added a third on 68 minutes and substitute Jeje Lalpekhlua rounded off a perfect start to the tournament for India 10 minutes from time.

The video went viral, in which team India spotted celebrating with the fans.

Nothing beats postmatch celebrations with the fans 👏🇮🇳! #AsianCup2019 pic.twitter.com/JFbAxuHKTS

Chhetri went past the Argentine superstar in the list of goals scored by an active footballer on the international arena, leading, as he has so many times done, his country to its first win in the AFC Asian Cup since 1964.

He was modesty personified after going past (in terms of goals scored at least) one of the modern day's greatest footballers.

"Records don't matter, it doesn't matter who scores the goals. Whoever scores the jubilation was the same. I'm glad we got all three points," Chhetri said after the sensational 4-1 result against Thailand, the team that featured three J-League players in its ranks.