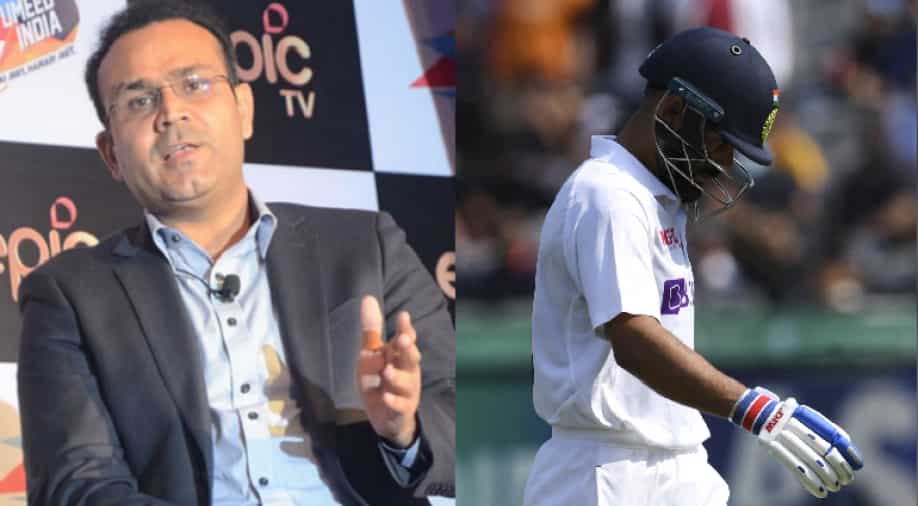 Former India batter Virender Sehwag was left stunned as a fan accurately predicted Virat Kohli's dismissal in his 100th Test on Friday (March 04). Kohli, who is regarded as one of the best batters of all time, became the 12th Indian player after the likes of Sachin Tendulkar, Kapil Dev and Rahul Dravid among others to play 100 Test matches for the country.

Kohli walked out to bat at his no.4 spot after India won the toss and opted to bat first at the IS Bindra Stadium in Mohali. While the expectations were high from the former India skipper, he managed to get 45 runs off 76  balls with the help of five fours before being dismissed by Sri Lankan spinner Lasith Embuldeniya.

Kohli looked in fine touch and played some great shots en route to his 45-run knock but failed to convert his start into a big score once again as he fell cheaply. A fan on Twitter had predicted Kohli's dismissal in a tweet that went viral soon as the former India skipper was sent packing in the exact manner.

The fan had predicted that Kohli will not score a hundred but will get out on 45 with four gorgeous cover drives. The fan also correctly predicted the mode of dismissal by claiming that Embuldeniya will clean bowl the star batter.

"Kohli won't score a 100 in his 100th test. Will score 45 (100) with 4 gorgeous cover drives and then Embuldeniya will knock his stumps over and he'll pretend to be shocked and will nod his head in disappointment," the Twitter user wrote at 12:46 AM on Friday. As the prediction turned out to be true, the tweet went viral with several fans reacting to it.

Former India opener Sehwag was also left stunned by the accurate prediction and reacted to the tweet. "Wow," wrote Sehwag while reacting to the prediction.

Playing his 100th Test for India, Kohli walked out to bat at the IS Bindra Stadium in Mohali with a standing ovation from the crowd. Kohli went on to add another feat to his illustrious cap as he became the fifth-fastest Indian to reach 8,000 runs in Test cricket. Kohli posted a 90-run stand for the third wicket with Hanuma Vihari (58) before being sent packing by Embuldeniya.

With the help of Rishabh Pant's 96 and crucial from the likes of Vihari (58), Kohli (45) and Ravindra Jadeja (45 not out), India managed to post a strong total of 357 runs on the board on Day 1 of the first Test in Mohali. Jadeja and Ashwin will resume India's batting on Day 2 on Saturday.