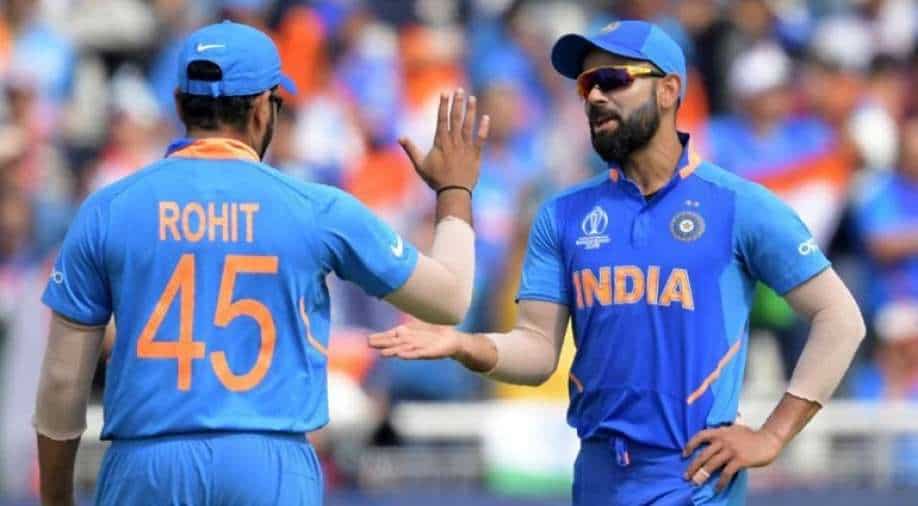 Virat Kohli and Rohit Sharma urged fans to come out and show their support for Team India. Photograph:( AFP )

They also urged fans to come out and show their support to the Women in Blue during their World Cup 2022 campaign.

The Women's 50-over World Cup begins as New Zealand take on the West Indies on March 4 before all eight teams play each other once to decide the top four, with the winner crowned in Christchurch on April 3.

Virat Kohli on Instagram wrote: "No better time to cheer for the #WomenInBlue and show the strength of #HamaraBlueBandhan than this, 'cause it's time for the ICC Women's World Cup 2022! So set your alarms for 6.30 AM on Mar 6, 2022 & watch #PAKvIND on @starsportsindia & Disney+Hotstar | ICC #CWC22."

Rishabh Pant posted: "The #WomenInBlue are on a mission at the ICC Women`s World Cup 2022. Join me to show your support for #HamaraBlueBandhan. Let's go. #TeamIndia."

Prithvi Shaw posted: "ICC Women's World Cup 2022 is here! I'm ready to show the strength of #HamaraBlueBandhan and cheer for #WomenInBlue as they take on #Pak in ICC #CWC22! Are you ready too?"

The 12th edition of the ICC Women's Cricket World Cup and the third one, after 1982 and 2000, to be held in New Zealand will be played from March 4 to April 3 in six different cities - Auckland, Christchurch, Dunedin, Hamilton, Tauranga and Wellington.