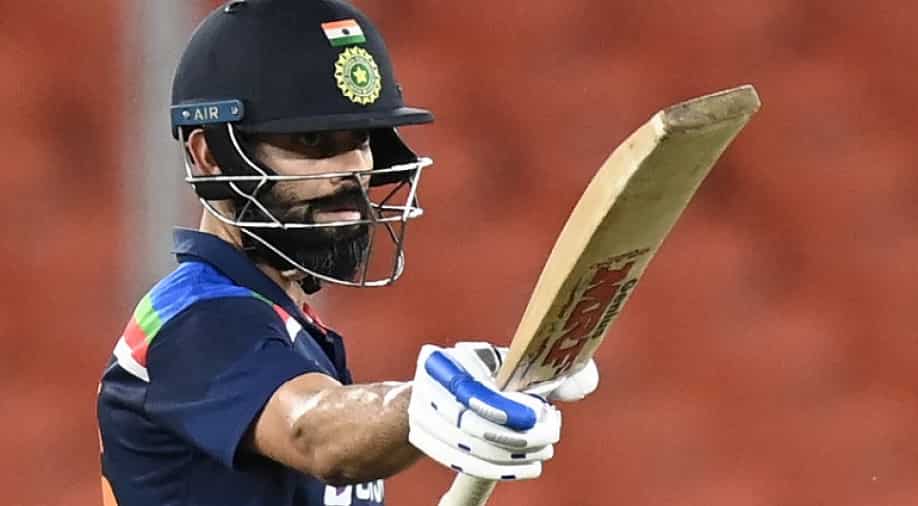 Virat Kohli will be looking to surpass Ganguly and Dravid in an elite list. Photograph:( AFP )

Indian skipper Virat Kohli is on the verge of surpassing current India head coach Rahul Dravid and Sourav Ganguly in an elite list as he gears up for the South Africa ODIs.

Virat Kohli shocked the entire cricketing world after dropping the captaincy bomb on social media last week. He confirmed that he will no more be leading India in Tests and will now continue playing as only a batter in all three formats of the game for the Men in Blue. Kohli will be looking to make the most of the upcoming ODI series against South Africa, which will be his first international assignment after giving up captaincy across all formats.

All eyes will be on Kohli the batter when India will lock horns with the Proteas in the series-opener of the three-match ODI series at the Boland Park in Paarl on Thursday (January 19). The batting maestro will be looking to achieve a few milestones in the upcoming ODI series against the Proteas in their own backyard and is on the verge of surpassing Sourav Ganguly and Rahul Dravid in an elite list.

Kohli currently has 1287 runs in ODIs against South Africa and will be just a few runs away from surpassing both Dravid and Ganguly in the elite list of Indian batters with the most runs against the Proteas in ODIs when he walks out to bat in the 1st ODI in Paarl on Wednesday.

Tendulkar is leading the elite list with 2001 runs in 57 ODIs against South Africa. Sachin is also the leading run-getter against South Africa overall and is followed by former Australia captain Ricky Ponting (1879 runs) at the second spot. Kohli is 8th on the overall list.

Also Read: 'It’ll be an honour': KL Rahul on potentially taking over from Virat Kohli as India's next Test captain

Virat Kohli has a sublime record against South Africa:

Kohli has an exceptional record against South Africa in ODIs with his 1287 runs in just 27 matches at a stunning average of 64.35 including four centuries and six fifties. He also has a brilliant strike rate of 86.90 against the Proteas in ODIs so far in his career.

With the burden of captaincy off his shoulders now, Kohli will be hopeful of making an impact as a batter and returning to his old form. The former India skipper will be also hoping to bring an end to his long-standing century drought during the ODI series against South Africa.