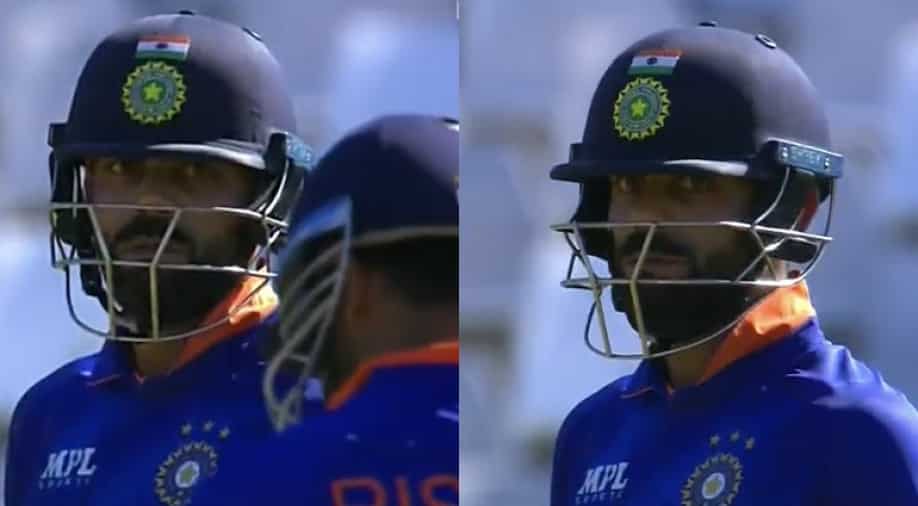 Virat Kohli was clearly not impressed as Rishabh Pant was out on a golden duck after playing a rash shot in the third ODI against South Africa on Sunday.

Virat Kohli was left stunned on the other end as Indian wicket-keeper batter Rishabh Pant threw his wicket away playing a rash shot in the third ODI against South Africa in Cape Town on Sunday (January 24). Recently, Kohli had defended Pant after he was criticised for his poor shot selection during the Test series against the Proteas.

However, Pant, who is known for his swashbuckling and aggressive style of batting, ended up making the same mistake once again. Pant came out to bat at number four after India lost Shikhar Dhawan's wicket on 116 runs in the 23rd over while chasing a challenging target of 288 runs. Pant went for a big shot the very first ball he faced from Andile Phehlukwayo and ended up paying the price.

It was an unnecessary rash shot from the left-hander, who has been often criticised for his poor shot selection for the Indian team. Pant was caught in the deep by Sisanda Magala as he was sent packing on a duck on the very first ball he faced in the game. Kohli, who was batting at the other end, was left stunned and gave a deadly stare to Pant after yet another casual error.

Kohli's reaction to Pant throwing his wicket away with a poor shot soon went viral on social media with fans criticising the left-hander for not valuing his wicket when playing for the country.

Virat Kohli gave a stare to Rishabh Pant after he got out pic.twitter.com/1zS6DABSw8

India were reduced to 118/3 after Pant's dismissal in the same over as Dhawan before Kohli, who played a fine knock of 65 runs off 84 balls, added a 38-run stand for the 4th wicket with Shreyas Iyer (26). Suryakumar Yadav scored 39 off 32 balls but the middle-order once again failed to deliver.

Deepak Chahar then came up with a sensational cameo of 34-ball 54 to keep India in the race till the end but his efforts went in vain as the visitors fell short by 4 runs to lose the game and concede the ODI series 3-0. India had earlier lost the Test series against South Africa 2-1.