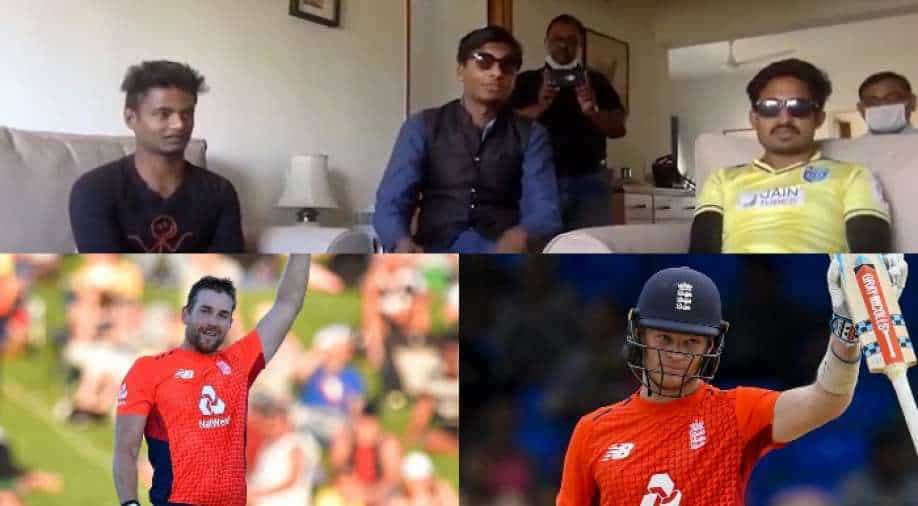 Ahead of the five-match T20I series against India, England cricketers Dawid Malan and Sam Billings had a heartfelt interaction with three blind cricketers – Vishnu, Dinesh and Nikul - from Gujarat about their love for cricket. The English duo discussed the feeling of stepping into the largest cricket stadium – Narendra Modi Stadium – in Ahmedabad while also expressing their thoughts on blind cricket.

Sharing their experience of interacting with the blind cricketers, Malan and Billings told WION that they were left awestruck by Vishnu, Dinesh and Nikul’s passion and love for cricket.

The England batsmen acknowledged that cricket is the game for everyone while saying that the passion shown by the blind cricketers, despite all the challenges they face, is a real lesson in how to overcome the most difficult of situations in life.

Malan and Billings shared their thoughts after their interaction with the blind cricketers from Gujarat with the video going viral on social media.

Dawid Malan told WION: “It was wonderful and very humbling to speak with Vishnu, Dinesh and Nikul. Their commitment to the game we all love, despite the challenges they face, is a real lesson in how to accept challenges and overcome them. Our chat also emphasised to me how cricket really is a game for everyone, no matter what circumstances you find yourself in.”

Sam Billings told WION: “I think Dinesh and Nikul, two of the players we spoke with, had travelled for five hours just to be on the call with us. Those two, together with Vishnu, the Gujarat captain, were fantastic to speak with and they were even generous enough to give us each a ball used in blind cricket. Dawid and I both agreed we would give it a try when we get the chance, although it seems incredibly difficult, and I think we are both in awe of the skills the players have.”

Who needs a hit of cricket chat ahead of 🏴󠁧󠁢󠁥󠁮󠁧󠁿 first #T20Cricket match with 🇮🇳 tomorrow? See English cricketers @sambillings & @dmalan29 have a chat with ‘unbelievably skilful’ blind cricketers from Gujarat about their love for the sport. #INDvENG pic.twitter.com/5Ni7GGPCcE

Vishnu, Dinesh and Nikul, in the virtual interaction asked Malan and Billings about their experience of stepping in the Narendra Modi Stadium, their experiences of playing in IPL and India, and what their favourite sport was while growing up. However, due to COVID-19 restrictions, the players couldn’t meet the blind cricketers in person. But Vishnu, Dinesh and Nikul gifted Malan and Billings the balls used in blind cricket and the English cricketers have agreed to give it a try when they get a chance.

This is fantastic - a real shame that COVID prevented the players from interacting face-to-face, but a great experience for the @englandcricket players to hear about how the Indians play blind cricket, & great for them to hear from two international stars... #INDvENG https://t.co/IGS1QUcZl4

England cricket team is in India for a gruelling full-fledged tour. Following the completion of the four-match Test series, the visitors will commence their five-match T20I series against India from Friday (March 12) in Ahmedabad followed by a three-match ODI series starting from March 23 in Pune.