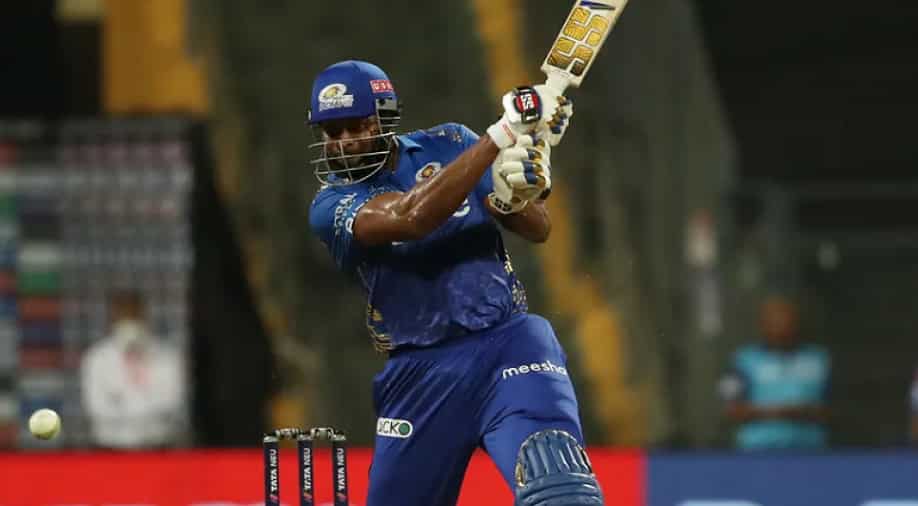 Five-time champions Mumbai Indians have been struggling to get off the mark in the ongoing Indian Premier League (IPL) 2022. With eight defeats in their first eight matches this season, MI have endured the worst start by any team in the history of the league. No other team has lost more than six matches at the start of the season.

MI slipped to their eighth successive defeat on Sunday (April 24) after failing to chase down a target of 169 runs against Lucknow Super Giants (LSG) at the Wankhede Stadium in Mumbai. After skipper KL Rahul's magnificent hundred helped LSG post 168 runs on the board, their bowlers proved too good for the struggling MI batters.

While skipper Rohit Sharma returned to form with 39 off 31 balls, the likes of Ishan Kishan and Kieron Pollard continued their rough patch with the willow. While Kishan was dismissed after scoring just 8 off 20 balls, Pollard managed 19 off 20 deliveries and stayed out in the middle till the final over of the run-chase but failed to take his team over the line.

Former India cricketer and popular commentator Aakash Chopra criticised Pollard for his poor show so far this season and claimed MI pacer Jaydev Unadkt seems to be scoring more runs than the star all-rounder. Unadkat has scored 59 runs for MI in five matches this season while Pollard has managed only 115 runs in eight matches.

"Kieron Pollard's bat is not striking the ball at all. Whatever he does, he is going at run-a-ball only. Quite a few times, it seems Jaydev Unadkat is hitting more than him. This is the reality where this team is standing," Chopra said in a video on his YouTube channel.

Chopra also shared his views on the slump in Kishan's form this season. The left-hander had made an impressive start to his campaign in IPL 2022 before bagging a string of low-key scores. Kishan was caught out bizarrely after a slow start against LSG on Sunday.

"Ishan Kishan's bat is not at all hitting the ball. It is worth seeing that a player's confidence can go so low. You are getting tears in your eyes when you see the guy is not able to bat. He was trying and the way he got out, it cannot get worse than that. What was that? Rohit Sharma was playing well, he played a bad shot to get out," said Chopra.

Also Read: He has it in him to lead India one day: Ambati Rayudu all praise for CSK skipper Ravindra Jadeja

Mumbai Indians have lost their first eight games in a row and their hopes of making it to the playoffs this season are all but over with the horror start. The five-time champions still have six matches left to play this year and will hope to spark a turnaround.