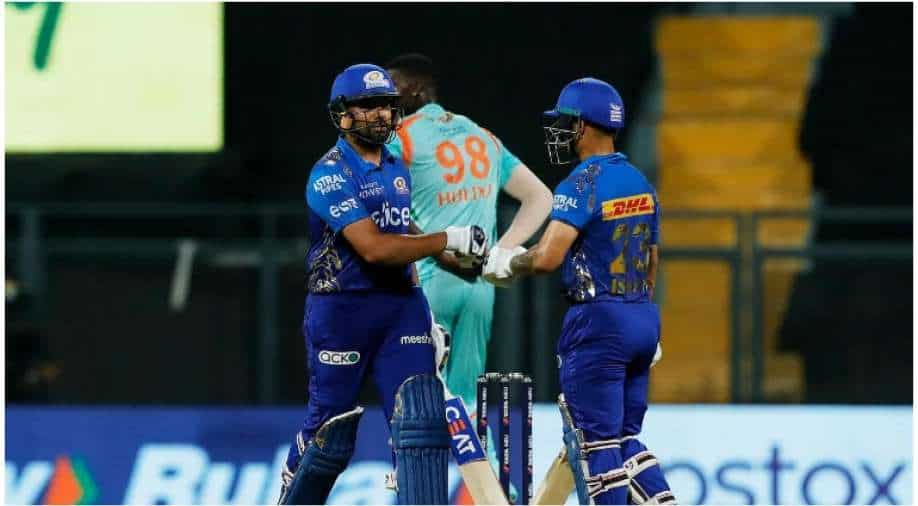 Former England captain Michael Vaughan has a suggestion for Rohit Sharma-led Mumbai Indians (MI) after yet another loss in IPL 2022 edition.

Rohit Sharma-led Mumbai Indians (MI) faced yet another defeat in IPL 2022 edition on Sunday evening (April 24). In what was the first reverse fixture of the ongoing season, the five-time champions MI locked horns with KL Rahul-led Lucknow Super Giants (LSG) at the iconic Wankhede Stadium, Mumbai in a bid to finally get off the mark in the points table after losing their first seven encounters.

Opting to bowl first, MI had no answers against Lucknow skipper KL Rahul as his 103 not out propelled LSG to 168-5. In reply, Mumbai's big guns such as Ishan Kishan, Rohit, Suryakumar Yadav and Kieron Pollard couldn't do anything significant as only Tilak Verma put up a spirited fight before the Men in Blue managed 132-8 in 20 overs, to lose by 36 runs.

After yet another defeat, eighth on the trot for the MI camp, former England captain has a suggestion for the franchise. "It’s just the Mumbai operation this year, it’s just not working. It’s now got to a stage where I think it’s worth them throwing in more youngsters to give them experience. Just to see if they can unearth one or two more wonderful young players. And then if you lose another couple, I honestly think it’s time for Rohit Sharma to take a breather,” Vaughan had said.

“Just take a breather. Just take your time. They play so much cricket, you have to pick and choose when you can take a breather. And if Mumbai can’t make the eliminators in a couple of games’ time, which is completely impossible, it probably is now,” he added.

Rohit himself has struggled to inspire his troops with the bat. So far, he has amassed only 153 runs in eight innings without a single half-century under his belt. MI continue to hold the bottom spot in the points table and are very much out of contention from the playoffs race.