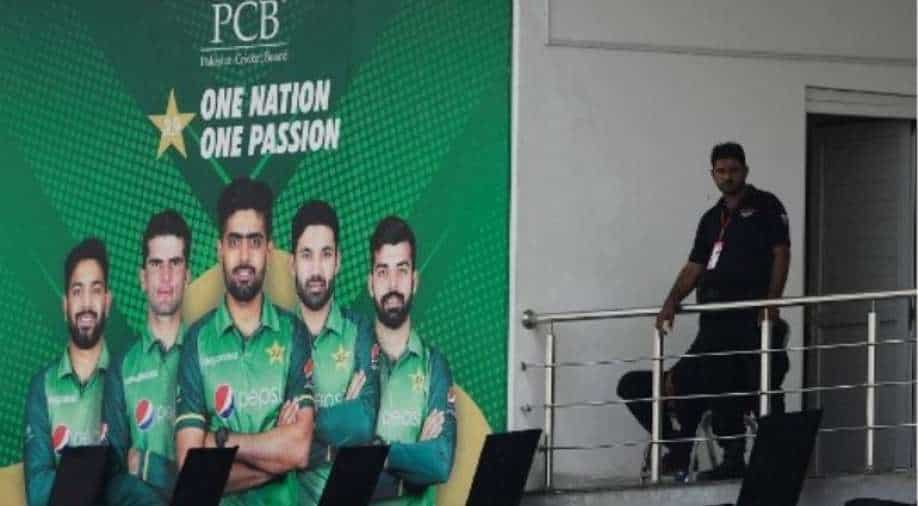 A policeman stands guard next to a poster featuring Pakistan's cricket players at the Rawalpindi Cricket Stadium in Rawalpindi on September 17, 2021, after New Zealand postponed a series of one-day international (ODI) cricket matches against Pakistan over security concerns. Photograph:( AFP )

Recently, New Zealand abandoned the series citing a government "security alert" on the day when the first match of the tour was supposed to begin.

Pakistan Information Minister Fawad Chaudhry is claiming that the threat to New Zealand's cricket team, that led to the cancellation of their Pakistan tour on September 17, came in an email that originated in India.

Recently, New Zealand abandoned the series citing a government "security alert" on the day when the first match of the tour was supposed to begin.

New Zealand cricket had, however, did not comment on the details of the security threat and later arranged a charter flight to bring their players home via UAE.

Addressing a press conference on Wednesday (September 22), Fawad told reporters, "This email was generated from India through a VPN showing the location of Singapore".

The press conference was tweeted by the official handle of the Government of Pakistan, as the minister can be heard giving details about his claims. He said in Urdu which can be loosely translated in English as: "The mobile device from which the threat was launched was launched in India in August 2019 and became active on September 25."

ALSO READ | As Pakistan's image takes a nosedive, what's next for the cricket-crazy nation under PM Imran Khan?

He added, "Through which a man named Om Prakash Mishra created a fake e-mail ID named Hamza Afridi from Mumbai and threatened to locate Singapore through VPN."

"Timing and text of the threat email suggest that the threat was not the reason for cancellation of the tour, but was issued after the cancellation to malign Pakistan and substantiate the security concerns of New Zealand and other touring countries," he said.

Chaudhry further claimed that the West Indies team, due to arrive in December, had also been sent a threat that he said was fake. Sheikh Rasheed Ahmad, who is Pakistan's interior minister had also commented on the cancellation of Pakistan vs New Zealand cricket series as he said that security forces had received "no reports" of a threat against the NZ team.

Ahmad told reporters: "This is their prerogative. Our security forces - our police, our armed forces, our SSG (Special Service Group) - none of these organizations had any reports of a threat. Nor was any threat received."

"The security situation in our country is excellent. We can give a guarantee that there is no security issue here, no security threat. However, the New Zealand prime minister said, 'although there is no issue of a threat, but we have information that when the team goes outside, there can be an attack on it.' They have therefore cancelled their tour unilaterally," he said.

"At a time when Pakistan is playing a vital role towards peace and security in the world; when Pakistan has very strong, reliable and robust forces to deal with terrorism, this is a planned conspiracy by some 'gloved hand' to end this tour," Ahmad further added.

The Kiwis were due to play Pakistan on Friday (September 17) in the first of three ODIs in Rawalpindi, before moving to Lahore for a five-match T20 series.

International cricket in Pakistan was suspended in the aftermath of terror attacks against the Sri Lankan side in 2009, but has slowly revived over the past two years.