'The love for him is unreal': SRH star pays tribute to CSK skipper MS Dhoni after chat with him in IPL 2022 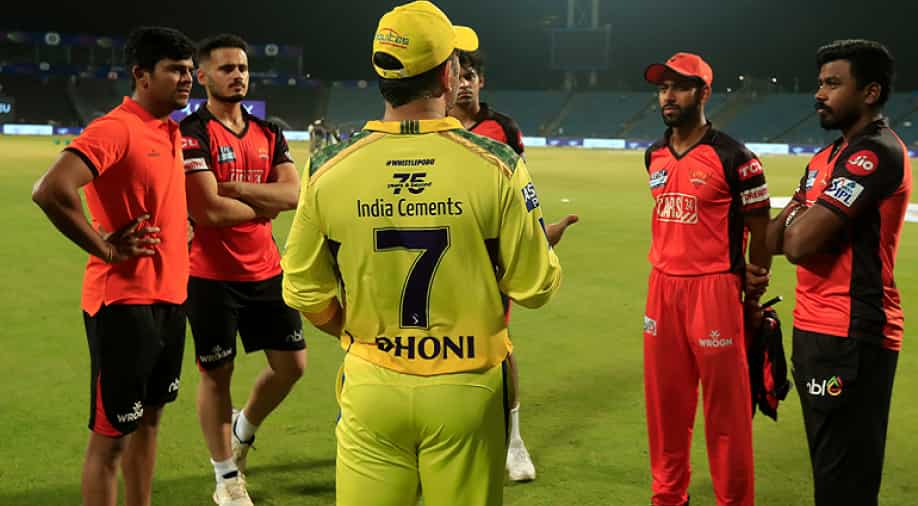 MS Dhoni had a chat with SRH players post CSK's win over them in IPL 2022. | @ChennaiIPL | Photograph:( Twitter )

MS Dhoni-led Chennai Super Kings recently defeated Sunrisers Hyderabad by 13 runs in the ongoing IPL 2022. One of SRH's star batters has paid a heartfelt tribute to MS Dhoni after his meeting with him post the game.

Chennai Super Kings (CSK) bounced back to winning ways as MS Dhoni made his return as captain of the side against Sunrisers Hyderabad (SRH) in the ongoing Indian Premier League (IPL) 2022 on Sunday. Dhoni took over captaincy once again after Ravindra Jadeja decided to step down from his post following CSK's disastrous run in the tournament.

CSK rode on brilliant knocks from Ruturaj Gaikwad (99) and Devon Conway (85*) to post a strong total of 202 runs on the board and went on to defend the total successfully to bag their third win of the season. It was CSK's first win under Dhoni after his return as captain of the side this season.

The atmosphere was electric at the MCA Stadium in Pune as CSK fans thronged the stadium in huge numbers to see Dhoni return as skipper of the four-time champions. Dhoni had received a huge reception from the fans when he walked out to bat at number three after the dismissal of Gaikwad during CSK's innings.

The cheers didn't die down even when CSK were out on the field defending the 203-run target during SRH's run chase. SRH superstar Nicholas Pooran was left in awe of the unreal love that Dhoni gets from his fans across India. The West Indies batter said it was one of the moments he would never forget in his career.

Pooran shared a picture of him having a chat with Dhoni on Instagram after the game and wrote - "It’s absolutely electrifying when this guy is in the stadium, the love for him is unreal, Pune was on fire for him. Definitely one memory in my career I’ll always remember."

Pooran was the top scorer for SRH in their run-chase as he slammed an unbeaten 634 off 33 balls laced with six sixes. However, his efforts were not enough to take Kane Williamson & Co. over the line as they slumped to their second consecutive defeat in the ongoing season.

CSK will next face Royal Challengers Bangalore while SRH will be up against Delhi Capitals in their next game of the season.