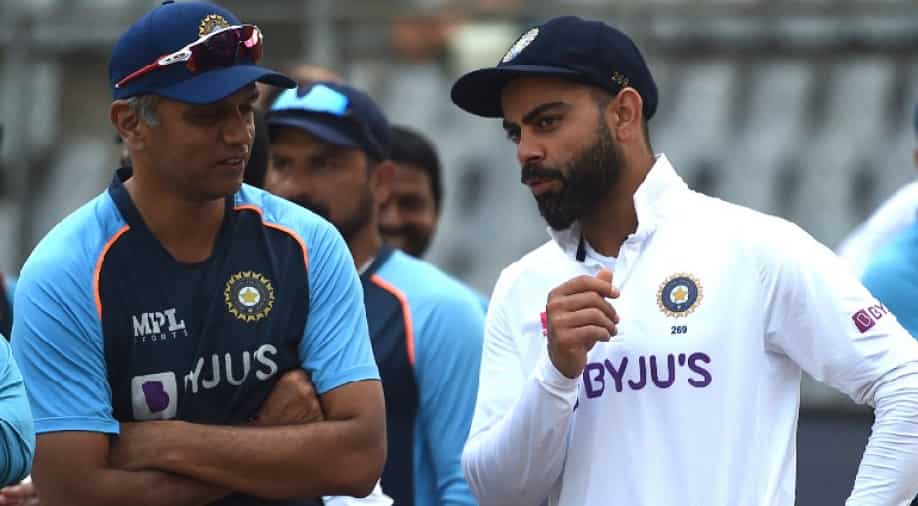 India head coach Rahul Dravid reacted to the controversy surrounding Virat Kohli and BCCI over the ODI captaincy row. Kohli had been replaced by Rohit Sharma as India's ODI captain earlier this month.

India head coach Rahul Dravid recently reacted to the raging row between Virat Kohli and the Board of Control for Cricket in India (BCCI) over ODI captaincy. Kohli was sacked as ODI captain earlier this month with Rohit Sharma taking over. Ever since his sacking, Indian cricket has been engulfed in one of the biggest controversies in recent times.

Speaking at a press conference ahead of India's departure for the South Africa tour, Kohli had contradicted BCCI president Sourav Ganguly's comments about his sacking as ODI captain. Kohli debunked Ganguly's claims that the BCCI president had asked him to not give up India's T20 captaincy in October this year. The Indian Test skipper also revealed there was no prior communication from the BCCI about the change in ODI captaincy.

Kohli said he was informed about the decision only 90 minutes before it was made official. Kohli's comments in public put both Ganguly and the BCCI in a spot of bother ahead of India's tour of South Africa. India head coach Dravid broke his silence on the controversy for the first time on Saturday.

Dravid refused to reveal details of his conversations with Kohli in the build-up to the decision and said the move was a call from the selectors. The head coach also said he would not like to discuss his internal conversations in the media.

"To be honest, that's the role of the selectors. Not going to get into conversations I might or might not have had. Not the place or time for that, or for discussing my internal conversations in the media," said Dravid in the presser.

Also Read: Rahane seems to be in good space: Rahul Dravid on batter's rough patch ahead of SA Test series

Dravid also lauded Kohli for leading the Indian Test team extremely well. He said the Indian captain has played a massive role in India's recent domination in the longest format and is someone who loves Test cricket. Kohli is India's most successful Test captain of all time with 39 wins in 66 matches as skipper.

"We want to keep improving and Virat has played a huge role in that. He has been fantastic as a captain and leader. He is one of those people who loves test cricket," Dravid said.