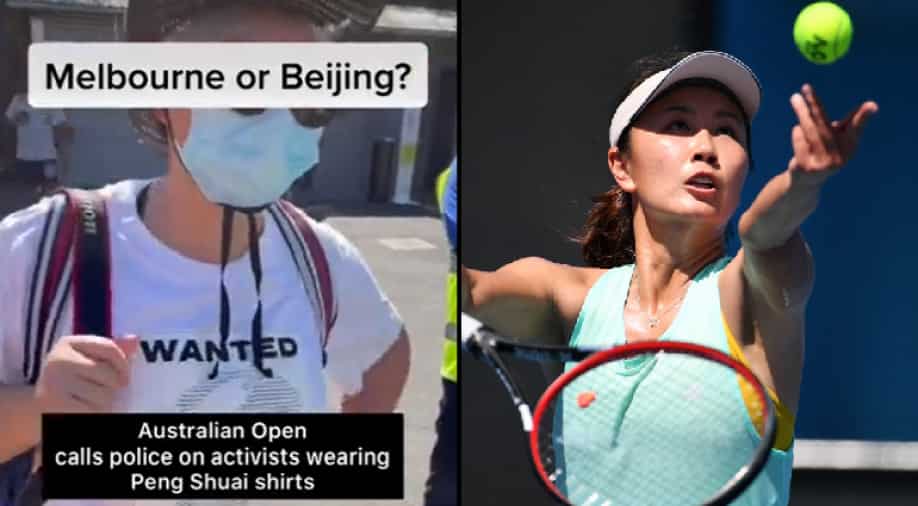 'Where is Peng Shuai?’ t-shirts have been banned at Australian Open. | Photo - Twitter/AFP | Photograph:( Others )

Tennis Australia has maintained the safety and well being of Peng Shuai remains their primary concern despite banning ‘Where is Peng Shuai?’ T-shirts at the ongoing Australian Open 2022.

Tennis Australia (TA) responded after a couple of fans were asked to remove t-shirts and a banner bearing the words - "Where is Peng Shuai?" A video had recently gone viral on social media where the tournament officials were seen confiscating the banner and asking the fans to remove their T-shirts which were deemed 'political' in nature.

In a video shared by Drew Pavlou, an activist from Brisbane, the fans can be seen being approached by tournament officials followed by an official from Victoria Police at Melbourne Park. A spectator is asked to remove her T-shirt which has an image of Peng Shuai in the front and the message "Where is Peng Shuai?" on the back.

The police officer can be heard telling the fans that Tennis Australia was allowed to confiscate any banner or T-shirt that are deemed to be promoting political sentiments. The fans were told that the material was against Tennis Australia's policy which bans political statements at a tournament.

“I’m not saying you can’t have those views, but Tennis Australia sets the rules here,” the police officer can be heard saying in the video.

The Australian Open is setting police on fans wearing Peng Shuai shirts because they take about 25 million a year in corporate sponsorship from China. So let’s print a thousand Peng Shuai shirts and hand them out at the entrance to the women’s final https://t.co/BN9oi6mPdl
  pic.twitter.com/Msi4g3QdII

Chinese tennis player Peng Shuai had gone missing for days after accusing former Chinese vice-premier Zhang Gaoli of sexually assaulting her in a social media post. The post had been deleted soon after being posted but it went viral in no time following which Shuai went missing and was nowhere to be seen.

She resurfaced in December and denied making claims of sexual assault in an interview. However, the tennis player is yet to make her competitive return to the court and has refrained from making too many public appearances. Several top tennis players have expressed their concerns over Shuai's well-being during the ongoing Australian Open 2022.

Responding after the fans were asked to remove banners and t-shirts carrying messages supporting Shuai, Tennis Australia said banners, clothing or signs of political nature are not allowed under their ticketing conditions. The tennis body also reiterated that Shuai's safety remains their primary concern.

“Under our ticket conditions of entry we don’t allow clothing, banners or signs that are commercial or political,” a Tennis Australia spokesperson said.

“Peng Shuai’s safety is our primary concern. We continue to work with the WTA and global tennis community to seek more clarity on her situation and will do everything we can to ensure her wellbeing," he added.

Recently, Australian world no.1 Ash Barty was asked about Shuai during the ongoing Australian Open. “We all hope that she’s well. We hope that she’s doing OK. Hopefully, it’s not too long until we see her back out here," she had said.