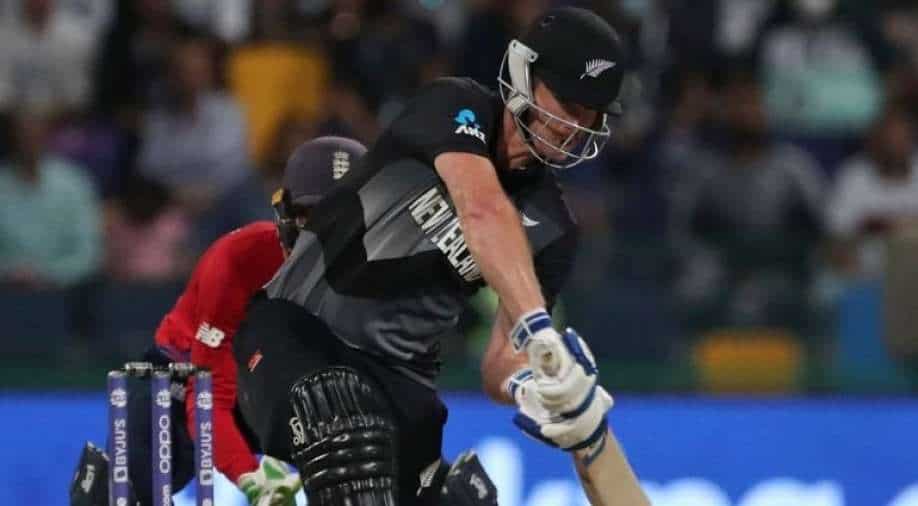 New Zealand all-rounder Jimmy Neesham, who knows a thing or two about heartbreaks on a cricket field, held back his celebrations when his teammates jumped in joy after the tense semifinal win over England in the T20 World Cup.

Neesham had his reasons to not move an inch in the dugout after scoring a momentum changing 27 off 11 balls in the first semifinal.

For someone who was involved in a nerve wracking Super Over finish in the 2019 ODI World Cup final where England controversially won on the boundary count rule, Neesham said he and his teammates have their eyes firmly set on the final against Australia on Sunday.

Both teams are yet to win a T20 World Cup title.

"It's a situation worthy of celebrating I guess - winning a semi-final - but you don't come halfway around the world just to win a semi-final," Neesham told New Zealand Cricket when asked about his rather muted celebrations.

"We've got our sights pretty firmly set on the game in a few days' time... I'm personally, and we as a team, are not getting ahead of ourselves. One game to go and I'm sure there will be a bigger outpouring of emotion if we manage to get across the line."

New Zealand are one of the most consistent teams in world cricket and especially at ICC events. Neesham said their robust planning is the reason behind their consistency.

"Look, I think we're experienced at it. We've done so well and so consistently in tournaments across five or six years. We know how to I suppose hit the reset button and put a win or a loss behind us pretty quickly.

"We've got pretty robust strategies around how to prepare for games with scouting, planning, and all that kind of stuff. So, those strategies will all kick over the next couple of days and we will get back on the training paddock tomorrow I think and prepare as best as we can."

Talking about his match winning partnership with opener Daryl Mitchell, who stayed unbeaten till the end, Neehsam said his plan was to try for a six every ball.

"I just said to Daz (Daryl Mitchell), I hit CJ (Chris Jordan) for a six second ball and Daz sort of came down and said: 'what do you think?' I just said I'm going to try and hit every ball for six.

"It doesn't always come out of the middle but chunked a couple and got enough to get over the rope. Yeah, ended up doing reasonably comfortably in the end."

New Zealand were able to score 60 off the last 29 balls for a memorable win.