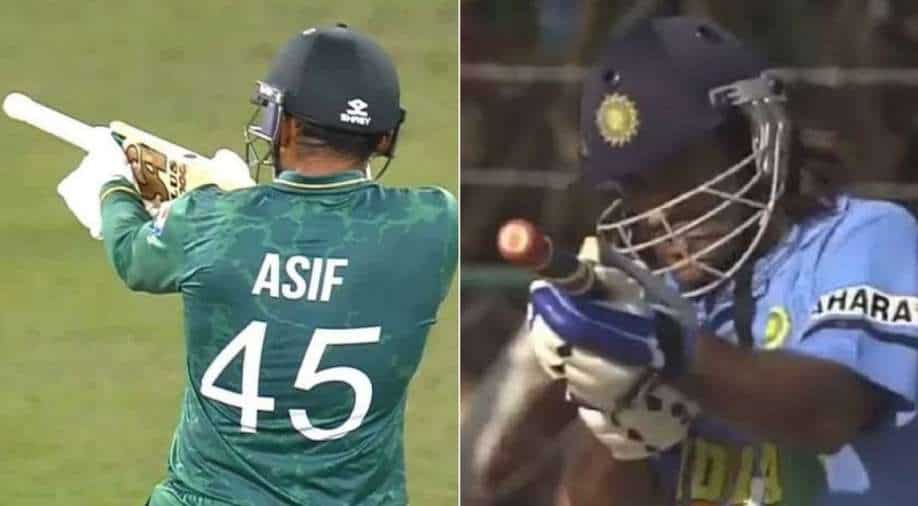 During the match, with Pakistan needing 24 off the last two overs, he went on the rampage against Janat, smashing the first, third, fifth and sixth deliveries high over the boundary

Pakistan's swashbuckling batter Asif Ali recreated MS Dhoni's 'gunshot' celebration during the match against Afghanistan on Friday (October 29), in the ongoing T20 World Cup. Ali was a vital cog in Pakistan's five-wicket victory against Afghanistan in the Super 12 stage at Dubai International Stadium.

During the match, the 2009 champions restricted Afghanistan to a modest 147-6 and the skipper Babar Azam anchored the chase with a fluent 51 but it was Asif who smashed four sixes in the penultimate over from Karim Janat to clinch the see-saw contest with six balls to spare.

After his power-hitting, Asif pulled off the 'gunshot' celebration, and now the Twitterati can't keep calm as it has reminded them of the former India skipper Dhoni, who has done it a few times in his illustrious career.

See some of the reactions here:

Afghanistan fought well. A brilliant display of bowling from our team, especially Shaheen Shah Afridi and Imad. Fakhar was just remarkable and the awesome finish from Asif Ali was indeed the cherry on top. All eyes set on the next one! 🙌👏🤲 #WhyNotMeriJaan pic.twitter.com/u13FKuAKxP

Still can't decide , whether @AasifAli2018 is a gun ,or having a gun . pic.twitter.com/UTrBCJIjYt

"Despite coming in to bat at a difficult situation when the required rate was already over 10, he kept his composure, even denied a single to back himself - Dhoni traits." @HindustanTimes on Asif Ali's gun celebrations. pic.twitter.com/wfbelMsd7a

During the match, with Pakistan needing 24 off the last two overs, he went on the rampage against Janat, smashing the first, third, fifth and sixth deliveries high over the boundary.

"I have confidence in my hitting and that paid off. I hit sixes towards the longer side of the boundary," said Asif after the match, adding that he had been practising batting under such pressure. "My job is to hit sixes, so I practise in scenarios based on situations, needing to hit sixes in the last five overs type situations," he said.

Having beaten India and New Zealand in their first two matches, Pakistan are effectively in the last four with clashes against minnows Namibia and Scotland remaining.