'Sorry for the hurt and pain I have caused to my wife': Tim Paine breaks down during emotional presser - WATCH 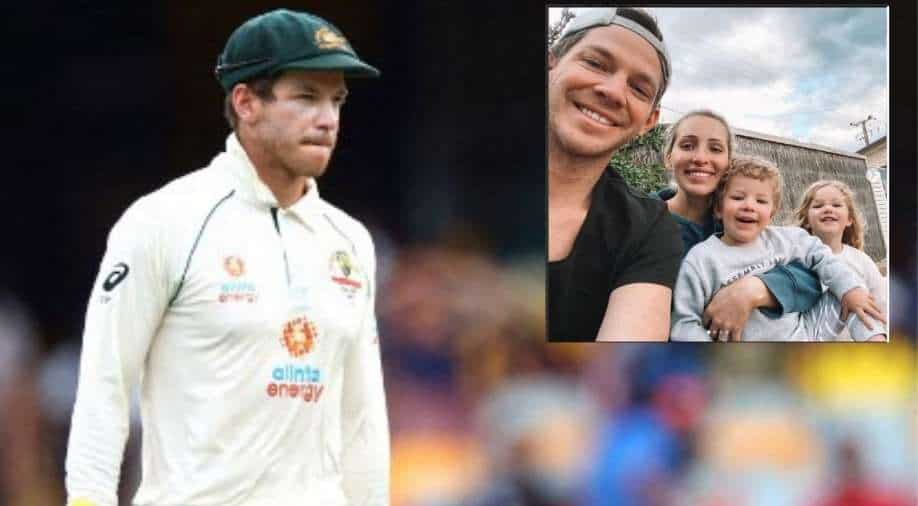 Tim Paine married Bonnie Maggs in 2016 and they have two children together - Milla and Charlie. (Image credit: bon.paine/Instagram) Photograph:( AFP )

With an emotional apology, the teary-eyed Tim Paine resigned as captain of the Australia Test cricket team over sending inappropriate text messages to a female co-worker in 2017.

The 36-year-old broke down while reading the statement during a press conference as he apologised to his wife, who was apparently aware of the messages but chose to stick by him.

The father of two said, "I'm deeply sorry for the hurt and pain that I have caused to my wife, my family, and to the other party. I'm sorry for any damage that this does to the reputation of our sport."

"I've been blessed with a wonderful, loving and supportive family and it breaks my heart to know how much that I have let them down. They have always stood by me, been my most loyal fans and I'm indebted to them for their support."

Tim Paine speaking after confirming he'd stand down as the Australian Men's Test captain. He will be available for the Ashes. pic.twitter.com/wpAcrqSLJC

Paine married Bonnie Maggs in 2016 and they have two children together - Milla and Charlie.

During the presser, Paine said, "Today, I'm announcing my decision to stand down as the captain of the Australian men's Test team. Nearly four years ago, I was involved in a text exchange with a then-colleague."

The statement was made after Australian media published a series of sexual graphics allegedly between Paine and a female co-worker, however, Cricket Tasmania said it believed the "interaction was consensual, private" and took place "between mature adults".

Paine added, "I recently became aware that this private text exchange was going to become public. On reflection, my actions in 2017 do not meet the standard of an Australian cricket captain, or the wider community."

The batter-wicketkeeper took over the Test captaincy in 2018 in the wake of the Sandpaper-gate ball tampering scandal that rocked Australian cricket. "I will remain a committed member of the Australian cricket team and look forward with anticipation to what is a huge Ashes tour," he said.