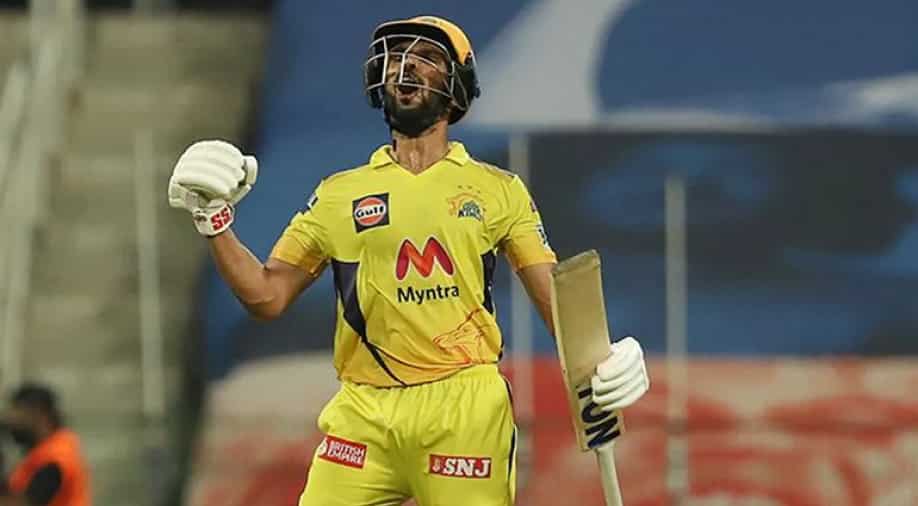 Chennai Super Kings (CSK) opener Ruturaj Gaikwad notched up his maiden century in the Indian Premier League (IPL) at the Sheikh Zayed Stadium in Abu Dhabi on Saturday. Gaikwad achieved the feat in his side's clash against Sanju Samson-led Rajasthan Royals (RR). The elegant right-hander slammed a stunning unbeaten 101 off 60 balls and brought up his hundred with a last-ball six against RR pacer Mustafizur Rahman.

The 24-year-old became the youngest centurion for CSK in the history of the Indian Premier League. The Indian youngster has been in terrific form so far this season and continued his purple patch against RR on Saturday.

He added 47 runs for the first wicket with his opening partner Faf du Plessis, who was dismissed after scoring 25 off 19 balls as the duo got CSK off to a slow and cautious start. Suresh Raina once again failed to make an impact and was sent back for 3 off 5 balls before Moeen Ali (21) combined with Gaikwad to add 57 runs for the third wicket.

Gaikwad changed gears after Ali's dismissal and took the RR bowlers to the cleaners enroute to his stunning knock. He needed 5 runs to reach the triple-figure mark in the final over with Ravindra Jadeja on strike. Jadeja got 15 runs off the first three balls, including a wide before taking a single to bring Gaikwad back on strike.

With five runs needed off the final two deliveries, it seemed Gaikwad might miss out on a well-deserved hundred as he completely missed the fifth ball trying to pull it away. However, the CSK opener capitalised on the final delivery and pummelled it away for a six to finish on 101 off 60 balls, laced with five sixes and nine fours.

In pics: CSK great MS Dhoni completes 200 matches as captain in IPL - A look at his staggering numbers

Gaikwad added an unbeaten 55 runs for the fifth wicket Jadeja, who slammed a quickfire 32 off just 15 balls with the help of four fours and a solitary six. The duo powered CSK to a huge total of 189 runs on a slow surface in Abu Dhabi.

CSK have already qualified for the playoff and will be looking to cement their spot on the top of the points table with a win against Rajasthan Royals. MS Dhoni & Co. are unbeaten so far in the UAE leg of the season.