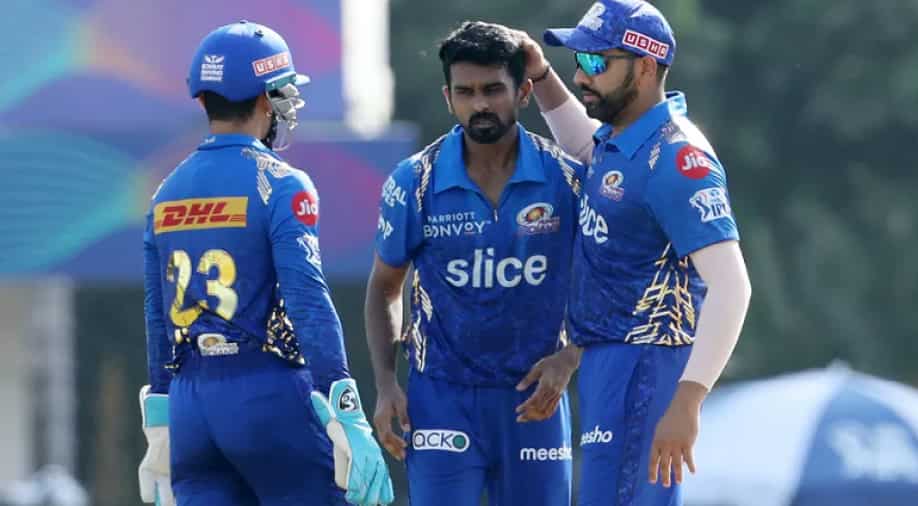 Rohit Sharma-led Mumbai Indians have become the first team to be knocked out of IPL 2022 after Rajasthan Royals defeated Punjab Kings on Saturday.

Rajasthan Royals (RR) defeated Punjab Kings (PBKS) by six wickets on Saturday to confirm Mumbai Indians' (MI) exit from the ongoing Indian Premier League (IPL) 2022. Rohit Sharma-led MI have become the first team to be knocked out of the IPL this season after a disastrous start to their campaign.

MI lost a record eight matches in a row at the start of the season - most by any team in the history of the competition which was enough to derail their campaign as they find themselves out of the race for a spot in the top four. The five-time champions still have four games in hand but cannot make it to the playoffs in any case.

Rajasthan Royals' win over Punjab Kings on Saturday means the Sanju Samson-led side now has 14 points from eleven games this season. RR are the third team after table-toppers Gujarat Titans and Lucknow Super Giants to reach the tally of 14 points which confirms MI's exit as even if Rohit & Co. manage to win their remaining four matches, they can only acquire a maximum of 12 points.

12 points won't be enough for Mumbai Indians to finish in the top four as their campaign in the league comes to a disappointing end with eight losses and just two wins in ten matches so far. The five-time champions have now missed out on a spot in the top four for two seasons in a row.

Mumbai Indians' auction strategy came back to haunt them this season as the likes of Tymal Mills, Tim David and Ishan Kishan all failed to perform up to the expectations. Kishan had a great start to the season but runs dried up as the tournament progressed.

MI's bowling attack was found wanted as Jasprit Bumrah lacked a partner in the pace attack with the like of Mills, Daniel Sams and Unadkat failing to deliver. While Sams seems to have found some much-needed confidence now, it is too late for MI to save their season.

The poor form of skipper Rohit Sharma and all-rounder Kieron Pollard also played a huge role in MI's downfall as the two stalwarts failed to perform consistently with the bat. Mumbai Indians have four games remaining in the season and will hope to finish the season on a high with some wins behind their back.