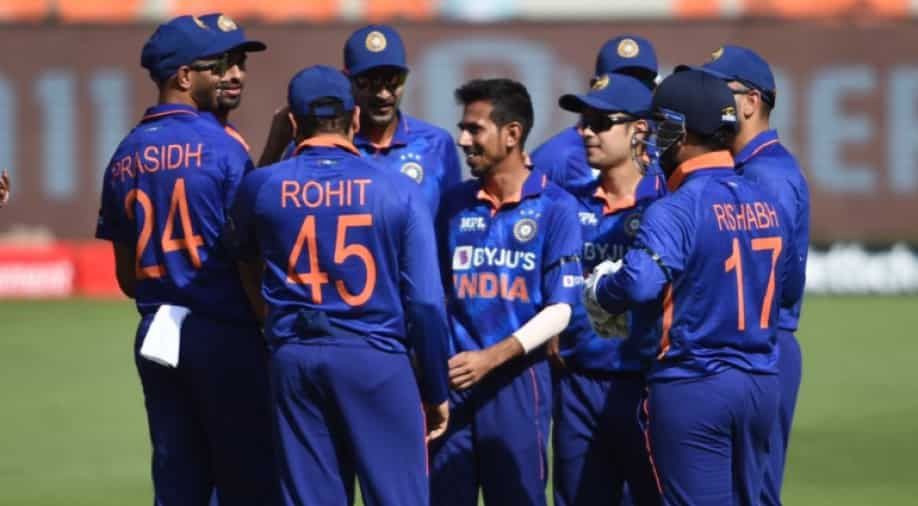 Rohit Sharma-led India defeated West Indies by six wickets in the first ODI to get off to a winning start in the three-match series on Sunday.

Skipper Rohit Sharma brought in a sense of calm with a sizzling 60 after India's new spin combination of Yuzvendra Chahal and Washington Sundar laid the platform for an easy six-wicket victory over West Indies in the first ODI which also happens to be the country's 1000th.

First, the hosts bundled out West Indies for a meagre 176 in 43.5 overs as spinners Chahal (4/49 in 9.5 overs) and Washington (3/30 in 9 overs) ran through their listless line-up and then the skipper smashed 60 off 51 balls with hosts chased down the target in just 28 overs.

It is the 10th time in last 16 games that West Indies have failed to bat full 50 overs despite presence of senior players like Darren Bravo, Kieron Pollard, Jason Holder, Shai Hope, Nicholas Pooran to name a few.

After a brief middle-order wobble, Suryakumar Yadav (34 no) and debutant Deepak Hooda (26 no) added 62 runs without much pressure to take the team home.

Just like the skipper, India also missed batter Rohit in South Africa in equal measure and on his comeback, there were no signs of any hamstring niggle as he smashed 10 fours and a six, adding 84 with stand-in opener Ishan Kishan (28).

Virat Kohli (8) also started with two boundaries but was holed out in the deep while Rishabh Pant was unfortunately run-out at the non-striker's end. But Rohit was in his element, while young Kishan, played second fiddle to perfection.

The former toyed with the West Indies attack, as the hosts were on course for a comfortable chase with the team fifty coming up in the ninth over.

Rohit, who made a comeback to the team after an injury, was brutal on veteran Kemar Roach, hitting him for two fours and a maximum ? his trademark pull shot, as India fetched 15 runs off the 10th over and raced to 67/0.

By the time Alzarri Joseph (2/45) trapped him leg-before, India were on their way towards an easy win in a milestone game. Earlier, Chahal and Sundar wreaked havoc on slow track as the West Indies batters made a beeline to the pavilion, save Jason Holder (57; 4x6) and Fabian Allen (29), whose 78-run stand for the eighth-wicket helped the team go past the 160-run mark.

Put into bat, West Indies lost opener Shai Hope (8; 2x4) cheaply after he was castled by Mohammed Siraj (1/26) in the third over as the visitors lost their first wicket for 13.

Hope had hit Siraj for two successive boundaries, but on the next his inside edge, while attempting a drive, shattered the middle and leg stump. Brandon King (13;2x4) started with a boundary, and then was joined by one-down Darren Bravo (18 off 34 balls; 3x4), as the two tried to resurrect the innings, but could only add 31 runs for the second wicket.

Bravo struck two boundaries off pacer Prasidh Krishna (2/29) in the sixth over, as the visitors crawled to 28/1 after six overs. The duo mixed caution and aggression as West Indies was poised at 39/1 after 10 overs.

But Sundar pegged back the visitors by removing King and Bravo in the 12th over as the visitors slipped to 45/3.
Sundar first sent back King, who chipped it to short mid-wicket where Suryakumar Yadav took an excellent catch. And then he trapped Bravo in front of the wicket, using his straight and flat delivery.

Then it was Chahal, who took two wickets in two successive deliveries in the 20th over as he removed both hard-hitting batters ? Nicholas Pooran (18; 3x4), whom he trapped in the front. This was Chahal's 100th ODI wicket.

Off the next ball, he cleaned up Kieron Pollard (O) with his googly that knocked the rival skipper's off-stump. West Indies were in a spot of bother as they lost half the side for just 71.

Chahal was on a rampage as he then removed Shamarh Brooks (12), who edged to stumper Rishabh Pant, as West Indies was teetering at 78/6. However, Holder and Allen tried to take the game deep. While Holder struck four sixes, Allen hit two boundaries, before Sundar lobbed a return catch of his bowling to send Allen back.

The team eventually was bundled out in 43.5 overs with Chahal removing last man Alzarri Joseph, to take his fourth.
The second ODI will be played at the same venue on February 9.