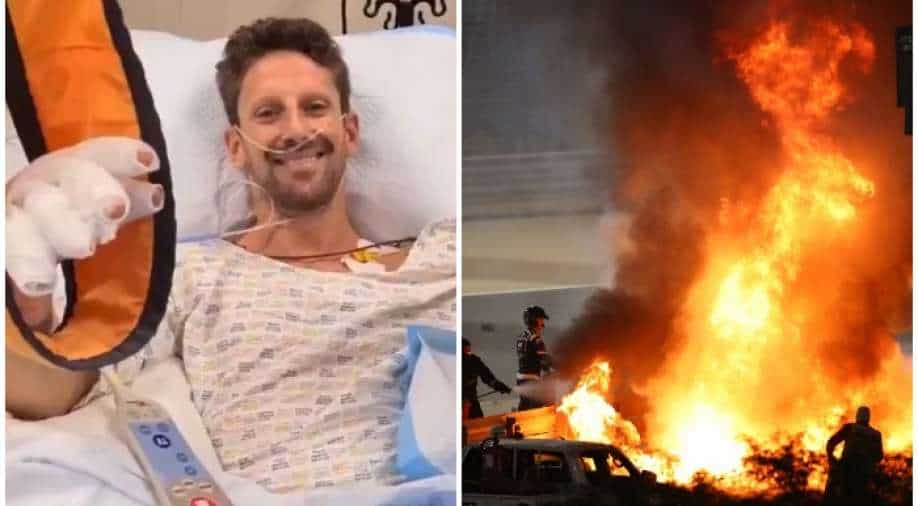 "Right now, my priority is letting my hands heal and making sure I recover as soon as possible," Grosjean told AFP.

Formula One driver Romain Grojean is on the path to recovery after suffering a horrific crash, arguably one of the worst in the history of F1 on Sunday.

IN PICS| Postponements and resumption: A turbulent year of 2020 for sports world

The blazing crash left the Frenchman receiving hospital treatment for burns as he defied all the odds to jump out of the burning car following a crash in the Bahrain Grand Prix, which was won by the record-breaker Lewis Hamilton.

Grosjean talked about his injury.

"Right now, my priority is letting my hands heal and making sure I recover as soon as possible," Grosjean told AFP.

"My left hand is fairly damaged but my right hand is alright. My left ankle and left knee are a bit swollen, and I have a sprained ankle, but that's nothing to worry about. Right now, my priority is letting my hands heal and making sure I recover as soon as possible, in time for Abu Dhabi (to watch the Grand Prix on December 13 - ed.) if I can, but mainly for the 50, 55 years I have left to live!" he added.

This is just ASTONISHING. Only just seen the helicopter footage of Romain Grosjean's crash today, and the actions of the marshal who saved his life. Thankfully see @RGrosjean TL for good news on relatively minor injuries. Incredible.pic.twitter.com/PoGNegedvv

Grosjean lost control of his car after colliding with the front left wheel of Daniil Kvyat’s Alpha Tauri in what was an intense battle for position at Turn Three of the opening lap. Grosjean, travelling at 250 km/h, hammered into the steel guardrails which buckled immediately. Trapped in his cockpit, Grosjean flew under the steel barrier as his car burst into flames.

Analysts said that his car’s safety had saved his life as he careered through the barrier before F1’s medical team and marshals with fire extinguishers helped him escape. Grosjean is doing fine and received some minor burns for which he is being treated at a hospital.