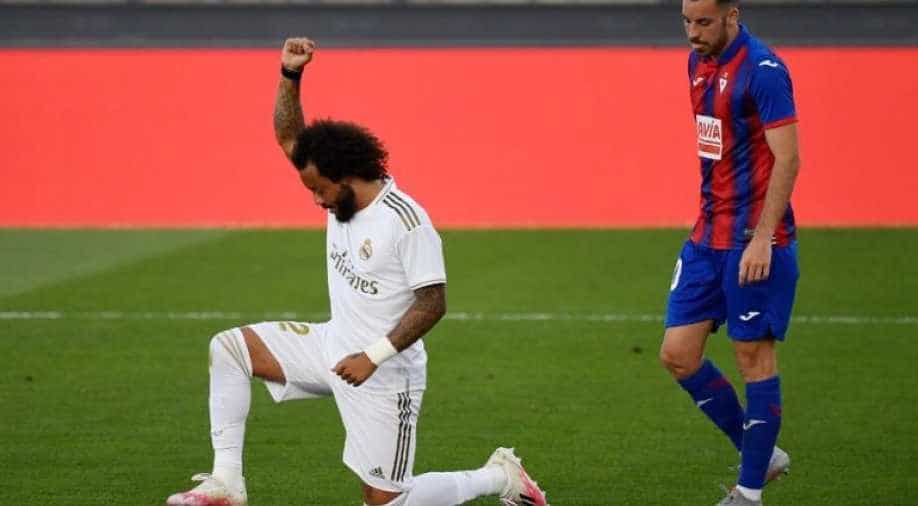 The Brazilian star put the Spanish giants 3-0 up in just 37 minutes on Sunday evening.

Real Madrid defender Marcelo showed his support to the Black Lives Matter campaign by taking a knee after he scored a goal for his club against Eibar.

The Brazilian star put the Spanish giants 3-0 up in just 37 minutes on Sunday evening.

Protests broke out after George Floyd's death giving momentum to the Black Lives Matter movement. Many football clubs and players have been seen taking the knee against police injustice and racial inequality.

Floyd died in Minneapolis after having a knee pressed into his neck for around nine minutes while being in police custody last month.

Players like Jadon Sancho, Marcus Thuram and Achraf Hakimi were seen taking the knee to show solidarity to the movement.

In the Premier League, teams like Chelsea, Liverpool and Arsenal have taken the knee during their whole-squad training sessions.

Premier League released a statement, which read: "We, the Players, stand together with the singular objective of eradicating racial prejudice wherever it exists, to bring about a global society of inclusion, respect, and equal opportunities for All, regardless of their colour or creed.

"This symbol is a sign of unity from all Players, all Staff, all Clubs, all Match Officials and the Premier League #blacklivesmatter #playerstogether."