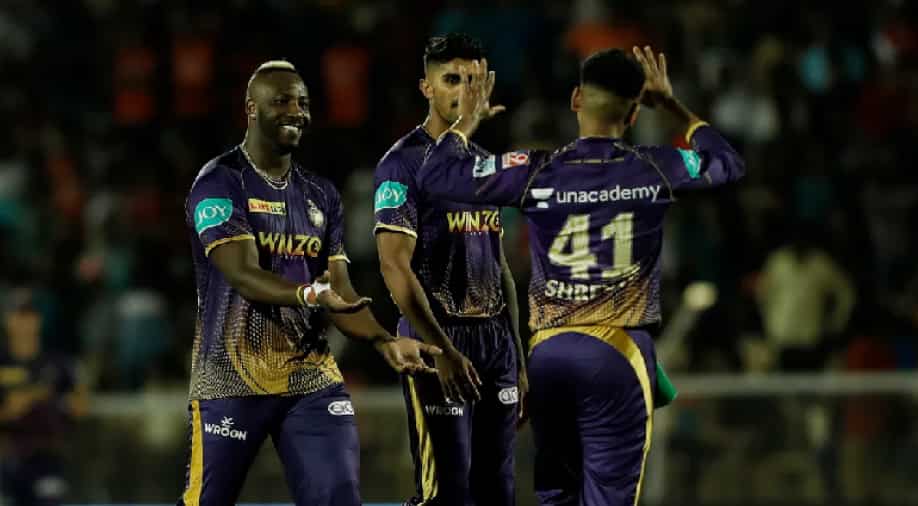 KKR will look to bounce back against RR on Monday. | Photo - IPL | Photograph:( Others )

Rajasthan Royals and Kolkata Knight Riders will be hoping to return to winning ways when they lock horns with each other in the ongoing IPL 2022 on Monday. Here is all you need to know about the game.

Kolkata Knight Riders (KKR) and Rajasthan Royals (RR) will be aiming to bounce back to winning ways when they lock horns with each other in match no. 30 of the ongoing Indian Premier League (IPL) 2022 on Monday. The match between the two sides will be played at the Brabourne Stadium in Mumbai where KKR are yet to win an IPL game.

KKR are heading into the clash against Rajasthan Royals after suffering back-to-back defeats against Delhi Capitals and Sunrisers Hyderabad in their last two games while the Royals faced a comprehensive defeat against Gujarat Titans in their last game. There is nothing to separate the two teams on the points table at the moment with six points each in their kitty, however, RR have played a game less than KKR.

KKR have failed to get consistent starts from their opener Venkatesh Iyer at the top while Aaron Finch's inclusion in the last game also didn't produce the desired results. Iyer has so far struggled to make an impact barring his half-century against Mumbai Indians and the lack of runs from his bat have hurt KKR.

Not only Iyer, but the likes of skipper Shreyas Iyer, Sam Billings and Nitish Rana too have not been consistent which has left Andre Russell with the bulk of scoring to do in the lower-middle order. Russell has so far responded well to the challenge but hasn't quite managed to set the season alight.

Russell is currently KKR's best batter this season with 179 runs in six matches and has also picked up five wickets. RR too have similar issues in their middle-order as skipper Sanju Samson's bat has gone quiet after firing at the start of their campaign. Yashasvi Jaiswal had to be dropped after a couple of average performances while Riyan Parag is yet to prove his credentials as a finisher.

However, RR's bowling attack has been their strength so far this season with the likes of Yuzvendra Chahal, Trent Boult and R Ashwin among the wickets. Prasdh Krishna has also been impressive so far and will look to haunt his former side KKR at the Brabourne Stadium on Monday.

Kolkata Knight Riders have a slight advantage over Rajasthan Royals when it comes to the head to head record between the two teams. KKR have 13 wins compared to RR's 11 in 24 meetings between the two sides.

Yuzvendra Chahal has a terrific record against KKR's middle-order batter Nitish Rana having dismissed him 4 times in the IPL. KKR spinners Sunil Narine and Varun Chakravarthy can trouble RR's in-form opener Jos Buttler, who has struggled against them.

Sanju Samson's form has once again dwindled as the season progresses. The RR skipper had notched up 85 runs in the first two games of the season and has since managed only 32 runs in the next three matches.