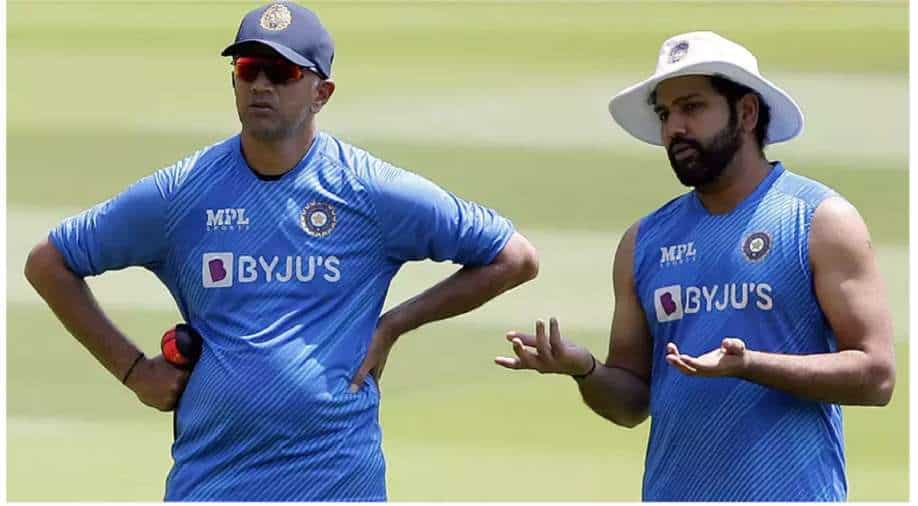 Dravid names options who could open in place of Rohit vs England Photograph:( ANI )

Head coach Rahul Dravid opened up on the options India have for the one vacant opening slot if Rohit Sharma misses the fifth and final Test versus England.

Team India are in a spot of bother ahead of the fifth and final Test versus England, which will get underway on July 01 in Edgbaston, Birmingham. On Sunday (June 26), the regular captain Rohit Sharma tested positive for Covid-19 and went into isolation since then. As per a report in PTI, Rohit tested positive for the deadly virus once again on Wednesday (June 29) and was scheduled to undergo another test in the evening, followed by another on Thursday (June 30) on the eve of the final Test.

Addressing the media during a press conference, head coach Rahul Dravid spoke on Rohit's availability, whether Jasprit Bumrah will captain in Hitman's absence, and also made heads turn by stating that the team has plenty of options regarding who will open with Shubman Gill if Rohit misses out.

In this regard, Dravid said during a press conference, "We'll make a decision. We will weigh a lot of factors. Obviously, Mayank is a regular opener. someone who opens regularly. We have other options too; (KS) Bharat himself has opened in a lot of games for Andhra and showed in that side game that he is batting superbly at the moment. He scored a 70 and a 40 (43) after opening the batting. We got him to open in that innings keeping a lot of things in mind."

Dravid also added No. 3 batter Cheteshwar Pujara's name in the mix and said, "Pujara has got a lot of great quality. He has opened for India as well in the past. So I would not want to give things away, but like I said, in our minds, we are clear on the direction we are going. We will see what happens to Rohit, but I am not at liberty to disclose the playing XI. But we have clarity."

In Pujara's absence, when he was dropped for the Sri Lanka home series early this year, Hanuma Vihari had been slotted at the No. 3 position. Even Hanuma has opened for India in the MCG Test in 2018-19. Hence, India have a lot of options if Rohit misses out. For the unversed, regular opener KL Rahul is also out of action due to injury. Thus, India is without their two openers who commenced the innings in the four Tests of the incomplete five-match series versus England, which ended abruptly last year due to the Covid crisis in the then Virat Kohli-led Indian camp.

India is ahead by 2-1 in the series and, thus, have an unassailable lead. Hence, they have a solid chance to win a Test series on English soil for the first time since 2007.