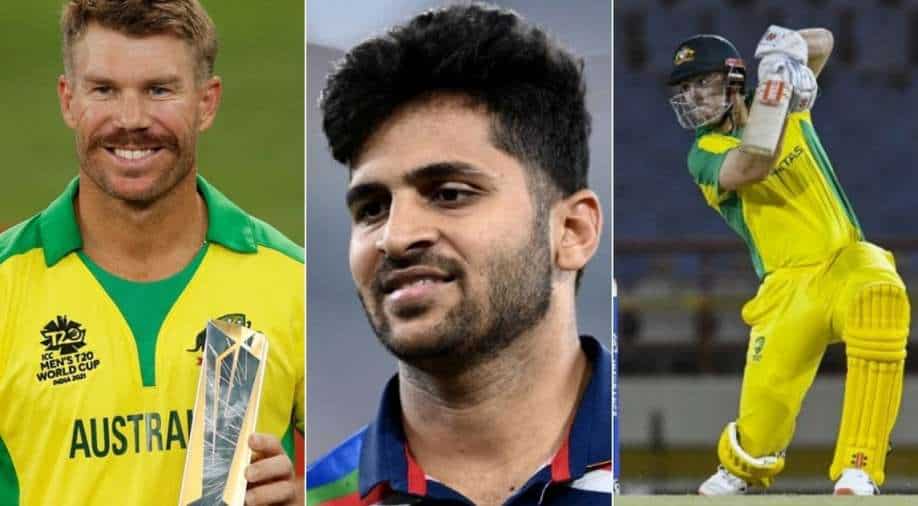 This is a combined photo of David Warner, Shardul Thakur and Mitchell Marsh. Photograph:( AFP )

Some of the highlight purchases for DC are David Warner, Shardul Thakur and Mitchell Marsh

The Indian Premier League (IPL) 2022 mega auction went quite well for the Delhi based franchise as they look at a future beyond the likes of Shreyas Iyer and Shikhar Dhawan.

For Delhi Capitals (DC), Iyer and Dhawan were key players in the past seasons inspiring the team to enter the final in IPL 2020. However, the trophy has eluded the team so far.

Aiming to win their maiden trophy, DC have done a massive reshuffling to the existing team as they have added some quality players to build a core team around the retained cricketers.

Ahead of the IPL mega auction, the JSW and GMR co-owned franchise had retained Rishabh Pant, Axar Patel, Prithvi Shaw and Anrich Nortje.

During the two-day auction, DC has made some massive buys. One of the highlight purchases was Australian swashbuckling batter David Warner as prodigal son returns to Delhi Capitals.

Warner, who won the man of the series award at the T20 World Cup in 2021, was part of the Delhi team when he had started his IPL career with Delhi Daredevils in 2008.

He later moved to Sunrisers Hyderabad (SRH) and emerged as an integral part of the team, however, he was last year dropped and was stripped of the captaincy.

ALSO READ | Never spoke to MS Dhoni about retention, always knew CSK would get me back: Deepak Chahar

With the addition of Warner, DC will now boast of having stunning pair of openers with the presence of Prithvi Shaw.

Another top buy for DC is Australian player Mitchell Marsh, who was also a key player during Australia's 2021 T20 World Cup-winning run. Warner and Marsh were acquired for Rs 6.25 crore and 6.50 crore respectively.

Meanwhile, India's Shardul Thakur became the franchise's most expensive buy at the auction for Rs 10.75 crore.

After the mega auction, here's how Delhi Capitals stack up:

Players acquired during the auction:

Delhi Capitals' assistant coach Pravin Amre said that the plan was to get an "explosive batsman" on top. He said, "We got David Warner, who won the man of the series award at the T20 World Cup in 2021."

He added, "We are also very happy to get a good all-rounder in Mitch Marsh. Shardul Thakur has been playing for India in all three formats and was part of India's winning team last year in Australia. Hence, as a franchise, we backed him. We are also happy to get good buys Kuldeep and Mustafizur under our budget."