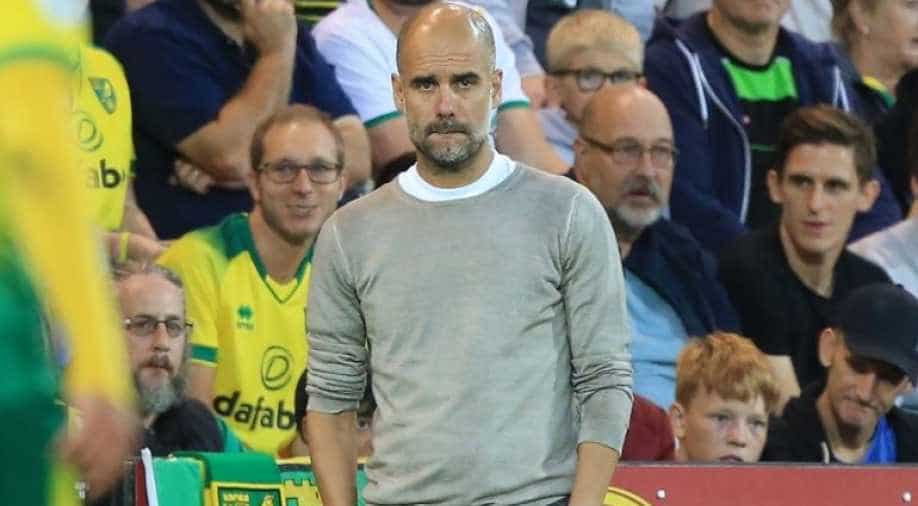 City lost for the first time in the league since January as Kenny McLean, Todd Cantwell and Teemu Pukki struck for an injury-ravaged Norwich at Carrow Road

Manchester City manager Pep Guardiola insisted he still "loves" his players after a shock 3-2 defeat at newly-promoted Norwich saw the Premier League champions fall five points behind Liverpool at the top of the table.

City lost for the first time in the league since January as Kenny McLean, Todd Cantwell and Teemu Pukki struck for an injury-ravaged Norwich at Carrow Road.

However, Guardiola claimed the odd slip-up is the norm rather than the exceptional form City have demonstrated in winning back-to-back Premier League titles.

Guardiola's men posted a record 100 points in 2017/18 and held off Liverpool's club record 97-point haul to retain their title with 98 points last season.

"I know what we are as a team, what we have done, what we are going to do again, and I love my players. It is a pleasure and honour to be with them," said the Catalan coach.

"That is the challenge in a high level. The people cannot expect all the time (to) win or make 100 points, 90 points.

"It shows how difficult everything (we have done) is. Now we need to recover, go to Europe (in the Champions League) and come back."

For all of Norwich's injury woes, it was a City absence that appeared the most significant as Aymeric Laporte was badly missed at the heart of the visitors' defence.

The French centre-back will be sidelined until at least the new year after undergoing knee surgery and John Stones and Nicolas Otamendi did little to settle City nerves that they will be able to hold the fort until the transfer window opens again or Laporte returns in January.

Sergio Aguero had reduced City's arrears to 2-1 just before half-time after McLean and Cantwell put Norwich in front.

But any momentum for Guardiola's men at the start of the second-half was wiped out when Stones played Otamendi into trouble and the Argentine was robbed on the edge of his own box by Emiliano Buendia, who squared for Pukki to make it 3-1.

"Nobody talked (to each other) and they score a goal," said Guardiola. "It happens, it's not good it happens but it happened today."

Laporte's absence could be vital in Liverpool's quest to end a 30-year wait to win the league, but Guardiola warned the European champions that it is still early days in the title race.

"Sometimes (players) make mistakes," added Guardiola of his defence. "We will look to see what I can do to help them.

"We know the quality of our opponents, not just Liverpool, but especially Liverpool and I know five points is five points, but we are in September."