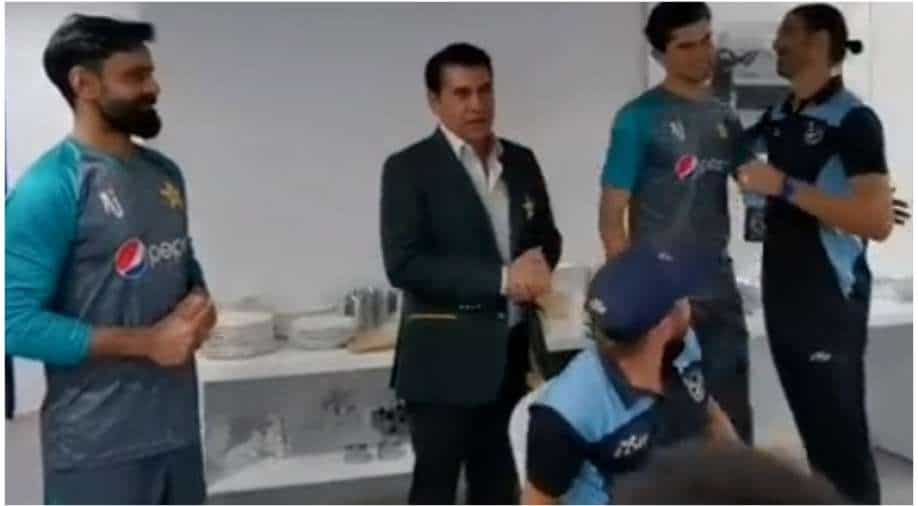 After Babar Azam & Co. thrashed Namibia by 45 runs, the Pakistani players visited the Namibian dressing room to congratulate them on their inspiring T20 World Cup journey. Here's the heartwarming gesture by the Pak cricketers:

Babar Azam-led Pakistan thrashed Namibia by 45 runs in their fourth and penultimate game in the Super 12 round of the T20 World Cup 2021 edition, on Tuesday evening (November 2) at the Sheikh Zayed Cricket Stadium, Abu Dhabi. With this win, the Men in Green have become the first-ever side to qualify for the T20 WC 2021 edition, being held in the UAE.

Choosing to bat first, Babar & Co. were off to a slow start but had wickets in hand as they consolidated in the second-half of their innings to post a daunting 189/2, riding on Babar's 70, Mohammad Rizwan's 79* and Mohammad Hafeez's 16-ball 32*. In reply, Namibia did lose convincingly but they didn't surrender easily as they kept on fighting and posted a decent 144/5 courtesy Craig Williams' 40 and David Weise's 43* (31). With the defeat, Namibia are pretty much out of contention from the semi-finals race but once again the lowly-ranked side made heads turn with their fighting spirit and positive body language.

Impressed with Namibia, the Pakistani players paid them a visit and congratulated them on their inspiring journey in the T20 WC. Here's the heartwarming gesture from the Pakistani cricketers:

#SpiritofCricket - Pakistan team visited Namibia dressing room to congratulate them on their journey in the @T20WorldCup#WeHaveWeWill | #T20WorldCup pic.twitter.com/4PQwfn3PII

For the unversed, Namibia enter the main draw of the tournament after beating Ireland and Netherlands in the qualifiers. They have also defeated Scotland in the Super 12 round. After three encounters, they remain above Virat Kohli-led India, who are yet to open their account in the tournament after two back-to-back losses.

Namibia will play their remaining games versus New Zealand and India.