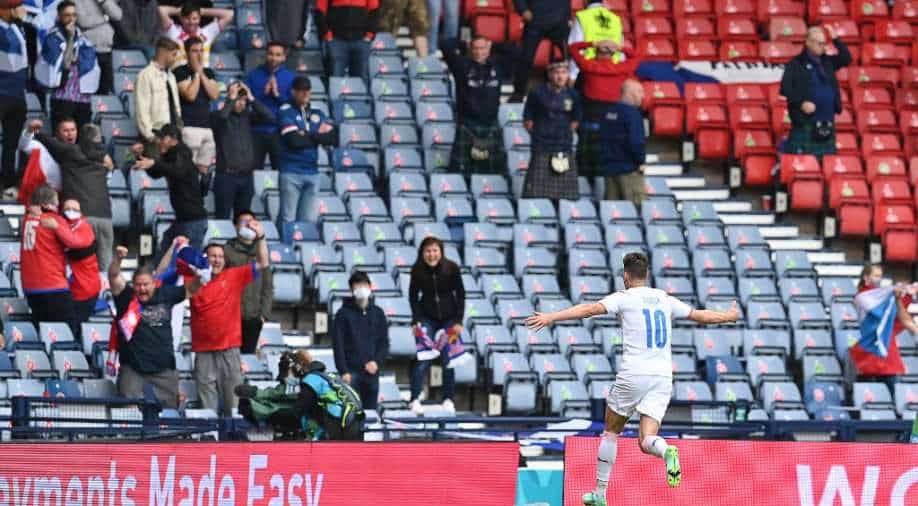 Czech Republic footballer Patrik Schick on Monday took the Euro 2020 by storm with an extraordinary goal from the half-line as he gave his team a much-needed second goal against Scotland.

Czech Republic footballer Patrik Schick on Monday took the Euro 2020 by storm with an extraordinary goal from the half-line as he gave his team a much-needed second goal against Scotland. Schick found the ball just at the center-line after a Scotland attack was broken down. Having seen the goalkeeper Marshall way out of his goal-line, Schick took a couple of touches to take the ball away from the defender before firing a lofted, curling shot towards the goal as the ball found a way to rattle the net.

Schick not only completed his brace with the outrageous goal but also gave the Czech Republic the much-needed second goal.

The commentators went berserk after Schick found the top corner with the out-of-the-world strike as did the crowd Hampden Park in Glasgow.

Schick's second goal (49.7 yards) is the furthest distance from which a goal has been scored on record at the European Championships since 1980.

ALSO READ: Football: Argentina were never too dependent on me, says Lionel Messi

WHAT A GOAL SCHICK!! 🇨🇿 pic.twitter.com/GEPTSXKY6G

Earlier in the first half, Schick had opened the scoring for the Czech Republic but the second goal will stay with him for a long, long time. The Czech forward celebrated the goal by running towards the crowd, who has been lively throughout the course of the match.

Goalkeeper Marshal tried to stop the ball from hitting the net but the accuracy of the lofted shot made it impossible for the Scottish.

The Euro 2020 has enjoyed a lively start with some goal-fest and the match between the Czech Republic and Scotland didn’t disappoint one bit.