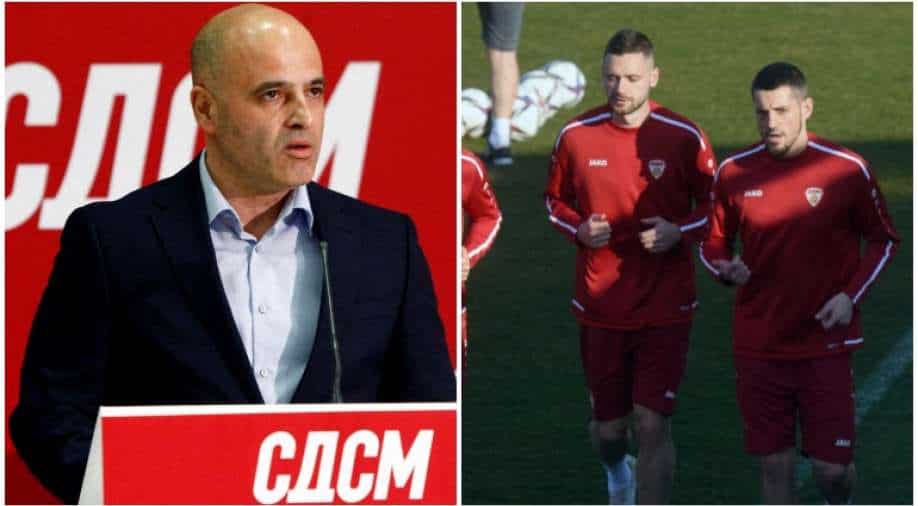 PM Dimitar Kovacevski went onto their plane on Sunday to wish the squad goodbye. (Photo- Reuters/AFP). Photograph:( Others )

North Macedonia's surprise win away to Italy in their World Cup playoff semi-final last week set up an unexpected clash against Portugal with the country's Prime Minister offering the squad 500,000 euros ($549,300.00) if they reach the 2022 tournament.

The result shocked the soccer world and derailed a possible clash between the last two European champions Italy and Portugal, who both surprisingly missed out on automatically qualifying from the group stage for the World Cup in Qatar.

After the playoff draw the headlines were all about the expected drama of one of the two soccer powers missing out on the finals with so many top players in their squads and how a likely playoff showdown between them would be full of drama.

But North Macedonia did not follow the script and knocked four-time World Cup winners Italy out of contention.

Portugal meanwhile survived late drama in their playoff semi-final as they beat Turkey 3-1 after visiting striker Burak Yilmaz missed a penalty five minutes from the end that could have forced extra time at Porto’s sold-out Dragao stadium.

Italy did not have such luck in Palermo, losing 1-0 after an added time Aleksandar Trajkovski goal silenced the crowd at the Renzo Barbera stadium who watched in disbelief as the opposing bench ran onto the pitch to celebrate victory with the players.

North Macedonia, who featured at Euro 2020 in their first appearance at a major tournament since the break up of Yugoslavia three decades ago, will now face Cristiano Ronaldo’s Portugal in another packed stadium in Porto on Tuesday.

The 50,000 tickets for Tuesday's game at the Dragao stadium were sold out in a few hours amid huge expectations from local fans as Portugal bid for a place at the global tournament.

Prime Minister Dimitar Kovacevski, who last year went to the Vatican to ask Pope Francis to pray for the team, went onto their plane on Sunday to wish the squad goodbye before they left for Porto and promised to reward them if they reach the finals.

Macedonia coach Blagoja Milevski's biggest ally as they prepare to face Portugal will probably be the fact that their opponents have no idea what approach his team will take.

"To be honest, we don't really know what to expect next Tuesday," Portugal midfielder Bernardo Silva told a news conference on Sunday, explaining that they were surprised at how differently Macedonia played in their previous matches.

Milevski explained their approach before the Italy clash, telling reporters: “Every game is unique, so anything can happen. I don’t have any specific pattern I like to follow.

“Of course, we are not at the same level as Italy yet but we're not here as a fluke and we expect to put in a great performance. I want my players to go out there and enjoy themselves.”

And they did just that as they produced an upset for the ages that surprised the Portuguese as much as Italy.

"I won't lie, we were all expecting it was going to be Italy (in the playoff final)," Portugal midfielder Joao Moutinho told a news conference on Saturday.

Portugal coach Fernando Santos is very much aware of the quality of their opponents, pointing out that North Macedonia won four of their last five World Cup qualifiers on the road.

"They won in Germany and in Italy. To say they are weaker is the wrong way of approaching this game," Santos said on Monday.

"We'll face North Macedonia with the same mentality as we would have against Italy. I know it’s the game of their lives, but it's also ours too. We can't afford missing the World Cup."