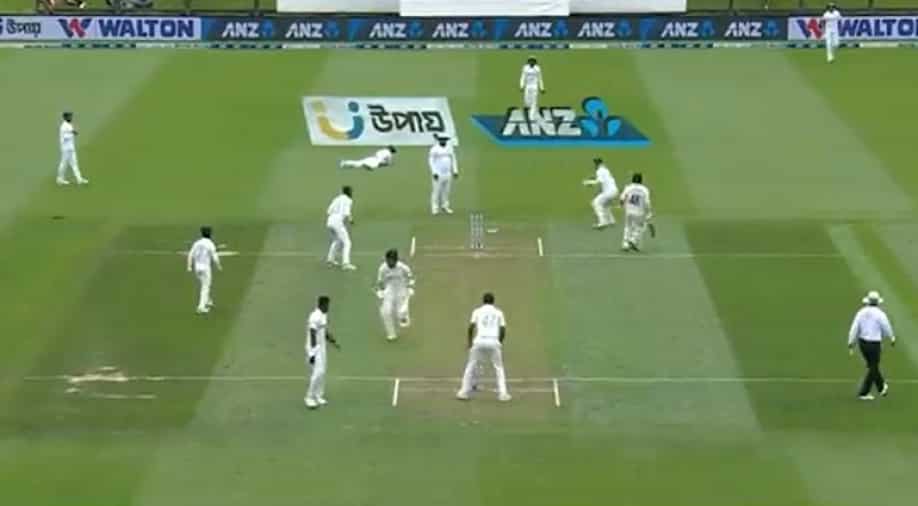 New Zealand batter Will Young managed to get 7 runs off 1 ball against Bangladesh. Photograph:( Twitter )

New Zealand batter Will Young managed to get seven runs off a single delivery in the ongoing second Test against Bangladesh after a dropped catch.

New Zealand got off to a brilliant start on Day 1 of the ongoing second Test against Bangladesh at the Hagley Oval in Christchurch on Sunday (January 09). Openers Tom Latham and Will Young put on a brilliant stand of 148 runs for the first wicket before Devon Conway joined the party with a sensational knock of unbeaten 99 to help the hosts finish strong at stumps on the opening day.

While Latham remained unbeaten on 186, his opening partner Young scored 54 off 114 deliveries before being dismissed by Shoriful Islam in the 38th over. His stay out in the middle could have been cut short earlier by Ebadot Hossain, however, Young managed to survive after edging one to the slip fielder and ended up getting 7 runs off just 1 ball.

The incident happened in the 26th over of New Zealand's first innings when Young was batting on 26. Hossain managed to induce an edge off his bat which flew towards the slip. He was put down by the fielder as the ball raced towards the boundary rope. Taskin Ahmed managed to cut it off before the ball could have touched the boundary rope and threw it back towards the wicket-keeper as the Young and Latham scrambled for the third run.

The wicket-keeper took an aim at the stumps after receiving the ball, however, both the Kiwi batters had already completed the third run by then. What followed was an absolute comedy of errors as wicket-keeper Nurul Hasan's throw missed the stump and saw the ball travel to the boundary line. Young managed to get three runs by running and a four from the overthrow as he ended up with 7 runs off just 1 ball.

Meanwhile, across the Tasman Sea...

Chaos in the field for Bangladesh as Will Young scores a seven (yes, you read that correctly!) #NZvBAN | BT Sport 3 HD pic.twitter.com/fvrD1xmNDd

Talking about the game, New Zealand dominated the proceedings with the bat on Day 1 of the second Test in Christchurch. Latham looked in great rhythm as he remained unbeaten on his 186 laced with 28 fours as he stands just 14 runs short of a double hundred in the game. Conway, on the other hand, will resume his innings on 99 on Day 2 and will look to get his century.

New Zealand are in a strong position in the game 1ith 349 runs on the board and will be hoping to post a big total on the board to ensure they can put pressure on the visitors when they come out to bat in their first innings.