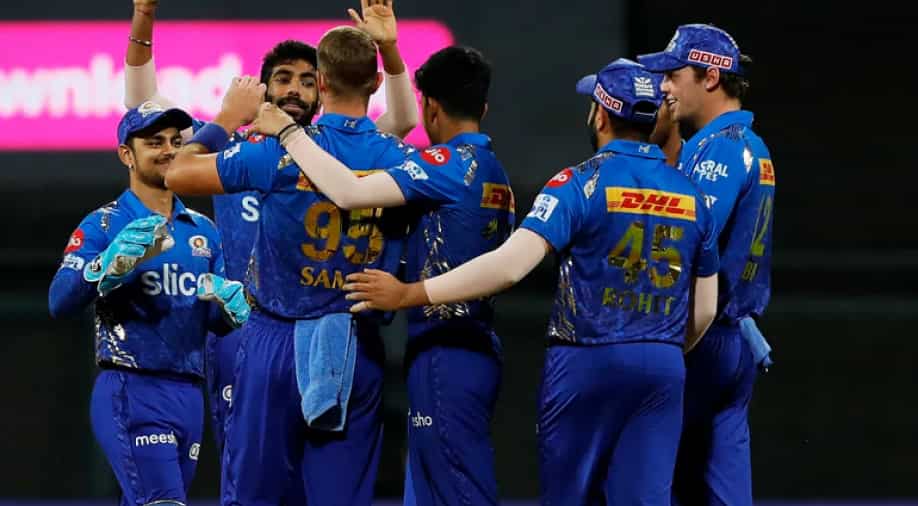 Mumbai Indians will take on Sunrisers Hyderabad in IPL 2022 on Tuesday. | Photo - IPL | Photograph:( Others )

While Mumbai Indians have already been knocked out from the race for the playoffs in the ongoing IPL 2022, Sunrisers Hyderabad have an outside chance. Here is all you need to know about the MI vs SRH clash in IPL 2022 on Tuesday.

Mumbai Indians (MI) might have been knocked out of the race for the playoffs in the ongoing Indian Premier League (IPL) 2022 but they still have two games remaining in the season and can hurt other teams' chances. The Rohit Sharma-led side will take on Sunrisers Hyderabad (SRH) in their penultimate game of the season at the Wankhede Stadium in Mumbai on Tuesday (May 17).

While Mumbai Indians have nothing to lose having already been dumped out of the tournament, SRH have all to play for as they still have an outside chance of qualifying for the playoffs if they can manage to win their remaining two games. SRH currently have 10 points from 12 matches with two games to go.

Unlike Mumbai Indians, SRH were quick to bounce back after a stuttering start to their campaign as they notched up five wins on the trot after losing their first two games in a row. However, SRH have since gone winless in their last five games and are on the verge of missing out on a spot in the top four.

While Mumbai Indians will be looking at giving more younger players a chance to showcase their skills looking ahead to the next season, SRH are unlikely to make any changes in their playing XI despite their five-match losing streak. Kane Williamson & Co., however, will be desperate to return to winning ways.

Here is all you need to know about the MI vs SRH clash in IPL 2022:

Mumbai Indians have a slight edge over Sunrisers Hyderabad when it comes to the head to head record between the two teams. MI lead 10-8 against SRH head-to-head.

Mumbai Indians pacer Jasprit Bumrah will be hoping to continung his fine form with the ball against SRH. He posesses a god record against SRH batter Nicholas Pooran, having dismissed him twice in nine balls. MI skipper Rohit Sharma has been dismissed 4 times in 37 balls against SRH all-rounder Washington Sundar.

Royal Challengers Bangalore (RCB) will be following the game closely as the resut of the match will decide their fate in the race for the playoffs. RCB are at the 5th spot on the table and currently have 14 points from 13 games with a negative run rate.