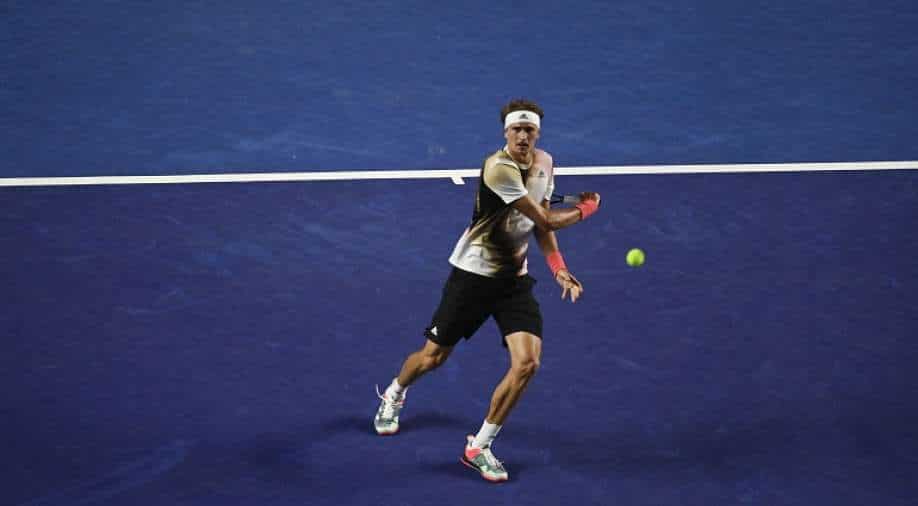 Germany's Alexander Zverev hits a return against Jenson Brooksby of the US. Photograph:( AFP )

Germany's Alexander Zverev was kicked out of the ATP 500 tournament in Acapulco, Mexico, for "unsportsmanlike conduct" after his doubles match, the men's tour said on Wednesday.

Germany's Alexander Zverev was kicked out of the ATP 500 tournament in Acapulco, Mexico, for "unsportsmanlike conduct" after his doubles match, the men's tour said on Wednesday.

Zverev, partnering Brazilian tennis player Marcelo Melo in doubles, came perilously close to hitting umpire Alessandro Germani when he repeatedly assaulted the umpire's chair with his racquet after a 6-2 4-6 (10-6) defeat to the British-Finn pair of Lloyd Glasspool and Harri Heliovaara.

"Due to unsportsmanlike conduct at the conclusion of his doubles match on Tuesday night, Alexander Zverev has been withdrawn from the tournament in Acapulco," the ATP said in a statement.

Zverev's team did not immediately respond to an emailed request for comment.

After shaking hands with the opponents, the 24-year-old Zverev, ranked third in singles, approached the umpire`s chair and hit it repeatedly before heading towards his courtside seat, upset over a line call during the match earlier.

He approached the chair a second time and once again hit it while shouting expletives.

The former U.S. Open finalist completed a first-round win over American Jenson Brooksby in the Abierto Mexicano tournament at 4.55 am local time on Tuesday, the latest ever finish for a professional tennis match.

Last year's winner, Zverev was scheduled to meet fellow German Peter Gojowczyk, who will now get a walkover to advance to the quarter-finals.
Zverev's angry outburst could earn him more sanctions from the men's governing body.

In 2019, after an initial fine of $113,000, Australian Nick Kyrgios was handed a suspended ban of 16 weeks and an additional fine of $25,000 for "aggravated behaviour" by the ATP following an internal investigation.

The ATP in October last year also launched an internal investigation into allegations of domestic abuse against Zverev, by his ex-girlfriend Olga Sharypova.