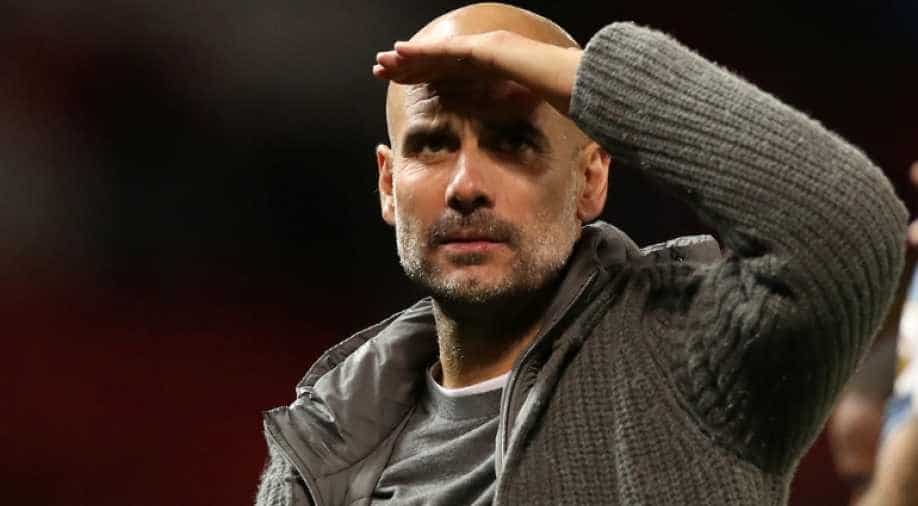 Guardiola said that Liverpool, who have lost just once this season, are also worthy champions

Manchester City boss Pep Guardiola has asked his players to be calm after their crucial win over Manchester United on Wednesday that boosted their Premier League title bid.

With three games left in the season, Manchester City have moved one point ahead of Liverpool and will become the first team to retain the Premier League title since Manchester United in 2009 if the team wins its last three games - against Burnley, Leicester and Brighton.

Guardiola said, "It's time to be calm. Don't read (the newspapers), don't switch on the TV, don't listen to the radio. Be calm, recuperate, sleep good and go to Burnley on Sunday."

Though Guardiola said that Liverpool, who have lost just once this season, are also worthy champions.

"Both teams deserve the title. But it can be just one. The team that is going to lose can't have regrets because they have given everything," he said.

"If we drop points and they have the chance to win, they are going to win the (rest of their) games," he added.

Pep also hailed his players as they have responded to the bitter blow of exiting from the Champions League.

City went out of the European competition on away goals to Tottenham Hotspur in dramatic fashion last week but dusted themselves off to beat Spurs in the Premier League on Saturday before Wednesday's 2-0 Manchester derby win over rivals United.

"That is the most incredible detail for these players. You cannot imagine how tough it was to go out of this beautiful (Champions League) competition when we felt it was there, it was really, really tough," Guardiola said.

"We had Tottenham at home, it wasn’t the best performance, but we had the sunshine, to stay alive in the Premier League... the pressure we had and the way we reacted. That is sometimes more important.

"Then we come here, our neighbours, the most prestigious team in England... winning with the pressure we had and being there, it was fantastic," the Spaniard added.