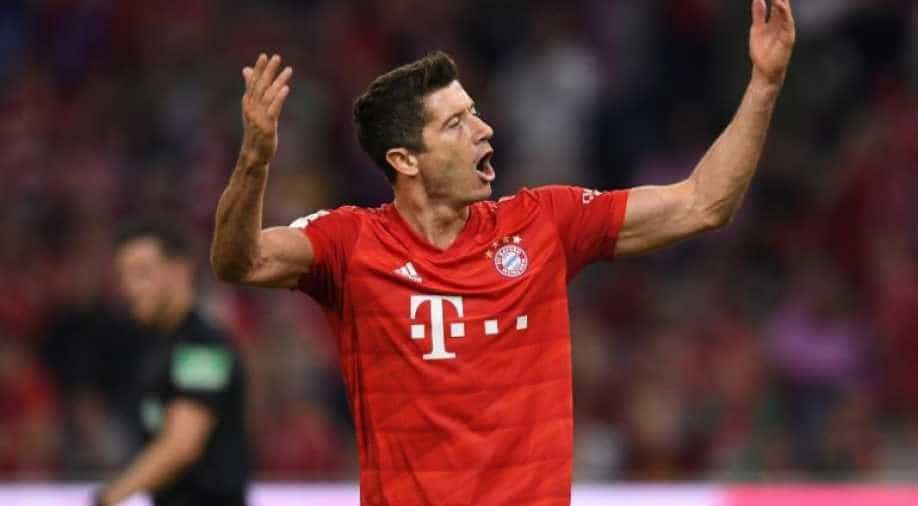 Robert Lewandowski, dubbed a "machine" by his wife, has added the Bundesliga record for most goals in a season to the long list of major honours and achievements he has claimed in his illustrious career.

Robert Lewandowski, dubbed a "machine" by his wife, has added the Bundesliga record for most goals in a season to the long list of major honours and achievements he has claimed in his illustrious career.

Gerd Mueller's mark of 40 goals in a campaign, set in the 1971/72 season, had withstood the test of time until Lewandowski converted a first-half penalty for Bayern Munich at Freiburg on Saturday.

While Mueller set his record over 34 league games, Lewandowski has scored his 40 goals in 28 matches, due to a knee injury last month and squad rotation.

Lewandowski has scored five Bundesliga hat-tricks this term, including a four-goal haul in a 4-3 win over Hertha Berlin in October.

"I have to be honest, I am astonished. I thought Mueller's record would last for forever," Bayern chairman Karl-Heinz Rummenigge said last weekend, after Lewandowski's treble against Borussia Moenchengladbach.

With 276 goals in 349 games for Bayern and Borussia Dortmund, Lewandowski is already the second-most successful striker in Bundesliga history after Mueller, who scored 365 in 427 matches.

Lewandowski's 55 goals in all competitions in 2019/20 were key to Bayern winning the treble, as the Poland striker was the first player to be top-scorer in the Champions League, Bundesliga and German Cup competitions in a single season.

He was recognised by FIFA after proving himself in the knock-out stage of the Champions League last term.

But Lewandowski was sidelined by a knee injury for Bayern's quarter-final exit to Paris Saint-Germain last month, as the French giants avenged their 2020 final defeat in Lisbon.

He is set to be the Bundesliga's top-scorer the sixth time in eight seasons, but Lewandowski was yet to inspire Bayern to European glory until last year.

His four goals for Borussia Dortmund in the 2013 semi-final first leg against Real Madrid helped his former club into the final, but they were beaten by Bayern at Wembley.

In Lewandowski's first five years at the Bavarian giants, Bayern failed to reach the showpiece match.

But he was crucial to Bayern's run last term.

He scored and set up Serge Gnabry's two goals in Bayern's 3-0 last-16 first-leg win at Chelsea.

When the return leg was played nearly six months later, Lewandowski had a hand in all four goals -- scoring twice and creating two more -- in the 4-1 win at the Allianz Arena.

He followed that up by scoring in the historic 8-2 quarter-final rout of Messi's Barcelona and netted again in the 3-0 semi-final win over Lyon.

He finished as the tournament's top-scorer with 15 goals, two short of Ronaldo's record for a single season.

- From raw talent to superstar -

Lewandowski was spotted as a raw 21-year-old playing for Polish club Lech Poznan, where he scored 41 goals in 82 games, and joined Dortmund in 2010.

He made his breakthrough under Jurgen Klopp, helping Dortmund win back-to-back Bundesliga titles in 2010/11 and 2011/12.

He scored a hat-trick in a 5-2 drubbing of Bayern in the 2012 German Cup final, but left for Dortmund's rivals two years later, having scored 103 goals for the club.

Lewandowski has now scored 293 times in 328 games for Bayern in all competitions.

He is known for his disciplined approach to nutrition and training, resulting in his honed physique.

"My husband is a machine," said wife Anna, a former Polish karate international who serves as his personal trainer.

Lewandowski is rarely injured and former Bayern captain Oliver Kahn sees him as "an absolute model of professionalism, a condition for staying at the highest level for a very long time".