Lyon rebound from two down behind closed doors to earn draw 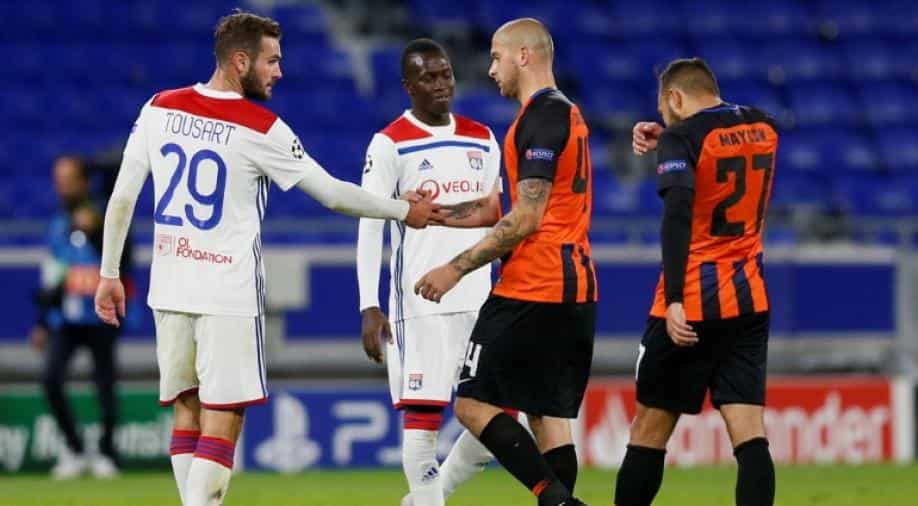 Lyonnais produced a stirring fightback to claw back two superb goals from Shakhtar Donetsk's Junior Moraes and rescue a 2-2 draw behind closed doors.

Olympique Lyonnais produced a stirring fightback to claw back two superb goals from Shakhtar Donetsk's Junior Moraes and rescue a 2-2 draw behind closed doors in a thrilling end-to-end contest at their Groupama Stadium on Tuesday.

Lyon, serving a one-game crowd ban for trouble caused by their fans during their Europa League tie against CSKA Moscow in March, looked set to pay the price as their early performance fell as flat as the atmosphere in the eerily-silent 59,000-seat arena.

Looking nothing like the inspired, organised outfit that defeated Manchester City 2-1 in England in their opening Group F match, Lyon were outplayed in the first half and deservedly fell behind just before the break to a superb left-foot strike from Moraes.

The Brazilian then doubled the lead with an even better second 10 minutes after halftime, curling his side-footed effort into the corner from a narrow angle.

Belatedly Lyon roused themselves with Moussa Dembele heading one back in the 70th minute after having already missed two fine chances and Leo Dubois striking his first goal for the club a couple of minutes later.

Both sides hunted for the winner with abandon in the last quarter with, first the Ukrainians looking as if they might collapse under the fightback but then almost stealing victory with a late flourish when a shot from substitute Olarenwaju Kayode struck the bar.

Bruno Genesio, Lyon's coach, conceded that his side had "completely messed up the first half" but added: "We managed to produce a reaction and that's important...Overall, I think a draw was a fair result."

Yet Paulo Fonseca, Shakhtar's coach, felt his side deserved all three points. "It's a pity we ended the game like that because we deserved more than just a draw."

Man of the match Moraes reckoned he had been left "sad" by the way his side lost concentration after his goals.

The draw left Lyon still at the head of the table on four points but Manchester City, who had earlier won 2-1 at Hoffenheim, took over in second place with three points as Shakhtar had to settle for a second successive 2-2 draw.