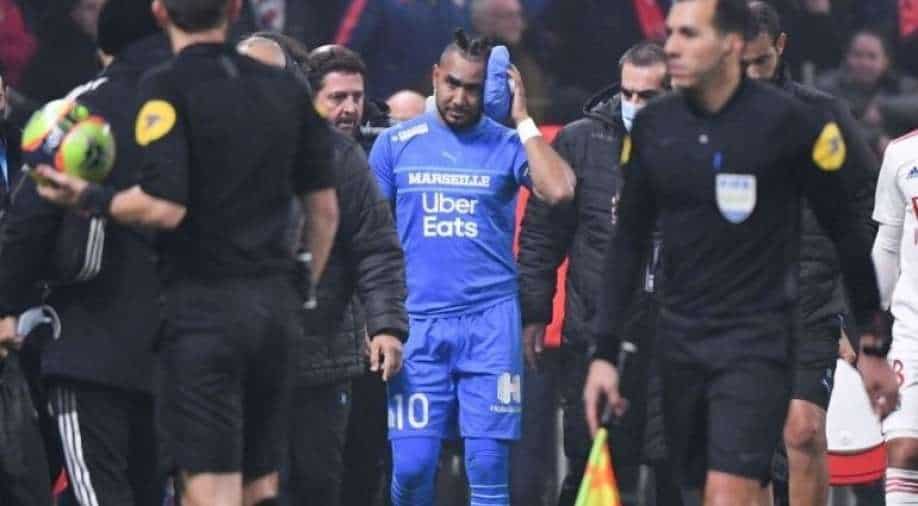 Dimitri Payet was also hit by a bottle during a game at Nice in August. He had been heckled by Lyon supporters while warming up before kick-off.

Sunday's Ligue 1 match between Lyon and Marseille was abandoned nearly two hours after it was interrupted when Dimitri Payet was hit by a water bottle thrown from the crowd for the second time this season.

The Marseille captain required treatment after being struck on the side of the head as he prepared to take a corner for the visitors in the fifth minute, prompting both teams to return to the changing rooms.

Marseille president Pablo Longoria called it a "dark night for football.  Dimitri is affected psychologically, it's not normal," he told Amazon Prime. "We always condemn any kind of violence, it affects everyone. Nobody who likes football can be happy tonight. The impact was a bit violent, he was very affected, with ice on his head in the dressing room."

It was the latest in a series of incidents that have blighted French football this season and confusion reigned after an initial decision was made to resume the game following a 90-minute delay.

"Contrary to what was announced, the referee has decided not to restart the game given the security of the players was not guaranteed," the stadium announcer said.

Lyon players initially came back out to warm up following an announcement that play would restart, but soon headed back down the tunnel with no sign of their opponents.

"My decision from a sporting perspective was always to not restart the match. Public order disturbances were mentioned," said referee Ruddy Buquet.

"The time taken over the decision is incomprehensible," said Lyon president Jean-Michel Aulas.

French league officials said they "regretted" the decision to try and restart the match. The LFP's disciplinary committee will hold an emergency meeting on Monday.

An individual was arrested and taken into custody after being identified by stadium security cameras, police told AFP.

Payet was also hit by a bottle during a game at Nice in August. He had been heckled by Lyon supporters while warming up before kick-off.

Nice were docked a point after the incident with Marseille, who on Wednesday were ordered to play their next home game behind closed doors after trouble during last month's clash with Paris Saint-Germain.

The game between Nice and Marseille was halted with 15 minutes left and replayed in its entirety two months later on neutral ground in Troyes and without fans.

Earlier in the day, Nice battled back from a goal down to win 2-1 at Clermont and move second, after Lens were thrashed by Brest.

Christophe Galtier's side are now 11 points behind league leaders PSG as they bid to qualify for the Champions League.

But Nice were rescued by in-form forward Amine Gouiri's late double as the France Under-21 international scored in the 77th and 82nd minutes to take his tally of league goals this season to eight.

They lost in the qualifying play-off four years ago.

Lens, who were second in the table at the start of the weekend, slipped to a surprise 4-0 hammering at struggling Brest.

Franck Haise's Lens, only in their second season back in the French top flight, were looking to move back within 10 points of PSG.

But a nightmare first half put paid to any hopes of that, as Steve Mounie gave Brest a third-minute lead before goals from Brendan Chardonnet and the in-form Romain Faivre made it three at the break.

Lens' miserable afternoon was completed in the second half as Jeremy Le Douaron added a fourth for the hosts in the 69th minute and the away side saw substitute Arnaud Kalimuendo sent off.

On Saturday, Lionel Messi scored his first Ligue 1 goal as PSG stretched further clear with a 3-1 victory against Nantes.